Quality Of Nigerian Movies Is Declining 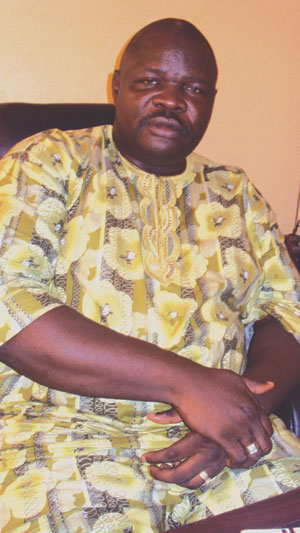 Benson Akintola Akindeju is the Chief Executive Officer of AK Media Concepts, producer of popular TV serials, Face-2-Face, Family Ties and Nowhere To Be Found. In this interview, he speaks about his success, challenges and other issues

You have been in the film industry for many years now, how has it been?
The industry is moving on although the challenges are there.

Your soap operas, Family Ties, Face-2-Face and Mission To Nowhere are doing well in the market, how did you come this far?
It takes the grace of God Almighty and seriousness. It is capital intensive, but we are coping. Once you start a soap, you must not repeat the episodes, but God has been strengthening us at AK Media.

Apart from finances, what other challenges are you facing?
Our industry has so many challenges. Apart from money, we also face challenges of artistes and locations. You may use a particular house for this season and the next time, the property owner may say you can no longer use it. Some artistes can also start demanding for too much when they realise that you are making money.

Funke Akindele was one of the cast in Family Ties but has been replaced by Thelma Okoduwa, what went wrong?
In a situation where someone cannot cope with something, the best thing is to shop for another one. We have young stars out there, so we always try to encourage them whenever we discover that they are talented.

But we learnt you dismissed her for insubordination?
Well, this is an issue I donâ€™t really like talking about. Funke is like a daughter to me and we still have a good relationship, thatâ€™s all. She is still our friend and not enemy. I donâ€™t really want to go into details of that matter.

Most Nigerian artistes have the problem of ego, how do you cope with them on location?
There are so many artistes, especially the popular ones, that when you fix a particular time with them, they wonâ€™t come at that time and when they finally do, they may decide to spend two or three hours doing make-up. But we have some of them that are popular and highly responsible. In AK Media, we donâ€™t tolerate indiscipline because we pay artistes well and as at when due. Besides, I prefer using new faces in my jobs because there are thousands of them out there looking for such opportunities.

Apart from the fact that you use new faces in your productions, what is the other quality of AK Media Concepts?
We donâ€™t owe those working with us and we also keep to time in all our dealings. I actually learnt all these from Wale Adenuga when he was my boss and the secret of success is making those around you happy. But when you owe your workers, they wonâ€™t be happy working for you and as a result, you wonâ€™t get the best from them. As for the artistes, we also attach much importance to their welfare.

What is your position on the influx of foreign soaps into Nigeria?
Our Minister for Information and Communication has done well in that aspect because most of the foreign soaps have been suspended. We still have foreign soaps, but not on family hours on our TV stations again. So, they donâ€™t pose any challenge to us.

What are the differences between the foreign soaps and their local counterparts?
You canâ€™t compare the setting of foreign soaps to ours in Nigeria. They have film villages, where their soaps are done, but here, we have not got to that level. I believe we will get there some day.

Most of the foreign productions have the backing of their government but the reverse is the case in Nigeria. Do you think we would have done better if there is support from government?
Yes, if we have governmentâ€™s backing, we will do excellently. But unfortunately, we donâ€™t. In fact, it is not easy for us to use police stations or vehicles in our productions. These are just some of the numerous challenges we are facing.

If you were to be the Minister for Arts and Culture, what will you assist the industry?
It is easier said than done, but if I have the opportunity to be there, I will encourage the industry very well. I will ensure that we have a film village. At least, this will be top on the list of my priorities.

Letâ€™s talk about Nigerian movies. Feelers from viewers suggest that the qualities of Nigerian films are on the decline, how true is this?
You are very right. You will realise that when watching some of these films, you wonâ€™t even understand the story. There is need for seminars/workshops that will re-orientate our script writers. Most of the script writers we have right now are non professionals; some of them just wake up one day and start writing stories. They fail to realise that it takes sheer brilliance and creativity to write good scripts.

Movies should be used as a platform to correct the ills of the society and, of course, enlighten the audience, but in Nigerian movies, we see people smoke passionately, while some do prostitution and at the end of the movie, viewers donâ€™t see these characters face the consequences of their immoral acts…
Thank you very much for your observation. We have a body that controls soap operas and the body will not allow unnecessary smoking, prostitution or kissing in our productions. Most of these acts are seen in movies, not in soaps. If your soap portrays such scene, even the TV stations will reject it.

Youâ€™ve been producing soaps for many years now, are you considering delving into movie production?
I canâ€™t afford to waste my energy because we all know the level of piracy in the movie industry. It is really on the high side. Basically, piracy is not giving us the chance to join the movie industry.

You worked with Wale Adenuga for 19 years before establishing AK Media Concepts, what did you learn from him?
Without mincing words, I learnt a lot from him. Administrative-wise, Wale Adenuga is very sound and I have learnt that from him. In AK Media, we donâ€™t operate haphazardly. Adenuga is someone that respects time a lot and doesnâ€™t owe his workers and TV stations.