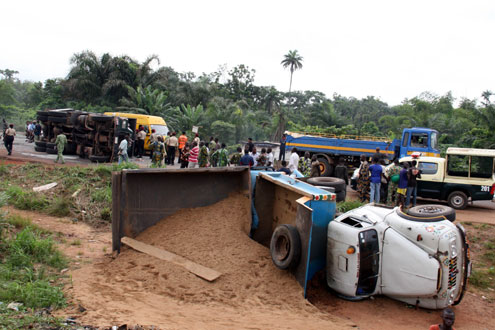 an accident scene in Nigeria

Tragedy struck this morning at Iyana Ilogbo, along the Lagos- Abeokuta Expressway when four people were killed in a multiple accident involving more than 16 vehicles.

P.M.NEWS learnt that the incident happened at about 5.30 a.m when a truck with registration number XF 614 NRIC, conveying cows from the northern part of the country, lost control and rammed into a commuter bus, killing four of the commuters while many sustained injuries. The injured were immediately rushed to the hospital

When P.M.NEWS got to the scene of the incident, the wreckage of seven trucks, ten cars and five commuter buses were still lying on the roadside.

FRSC officials, police and officials of the Traffic Compliance Enforcement, TRACE, were at the scene controlling traffic and removing the damaged vehicles from the road.