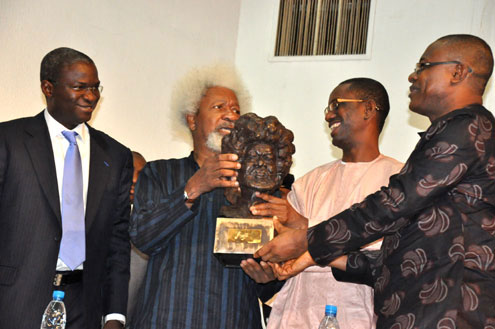 Speaking at the Muson Centre, Onikan venue of the 13th Professor Wole Soyinka Lecture organized by the National Association of Seadogs to mark the occasion, Governor Fashola congratulated the literary icon â€œfor going beyond the three scores and ten and advancing up to additional six yearsâ€, praying that God grants him more years to continue his contributions to the nationâ€™s political development.

Governor Fashola also commended the National Association of Seadogs for the initiative of organizing the lecture series, saying the 13th lecture has significantly thrown up another national icon, Malam Nuhu Ribadu, who, according to him â€œhas the task of explaining to us why Nigeria, as a people, has trivialized important things and raised trivial matters to embarrassing national levelsâ€.

In his lecture titled, â€œNigeria at 50: Crises of a Nationâ€, Mallam Ribadu, who was the Guest Lecturer at the occasion, called on Nigerian youths to rise to the challenges of National Rebirth saying the Nigerian project is not a lost cause.

According to Ribadu, though Nigeria has missed the mark on many scores in terms of nation building, it is not too late to redirect the course adding that many nations that had reached the brink of rupture and disintegration â€œhave been able to survive on account of dogged will for collective redemption and with the opportunity of an imaginative leadershipâ€.

â€œAt this proper beacon of a jubilee anniversary, I want to strongly challenge fellow compatriots in this hall and outside it, to make a pledge of honour on how to give our federal experiment and our democracy a makeover that is mediated by equity, rule of Law and transparent sense of justice, and above all, a sincere commitment to build a modern multicultural Nigeriaâ€, Ribadu said.

He lamented that â€œthe boundless energies of our people, the enviable spirit of our youth and the lush resources of our environment all lay in waste and abuse, increasing our embarrassment to see what we are offering the nation, the continent and humanity as the product of labour from the largest black nation on the planetâ€.

â€œA nation that produced the likes of Chinua Achebe, Oladele Awojobi, Chike Obi, Bala Usman, Fela Anikulapo Kuti and Murtala Mohammed cannot agonize for lack of models. A nation that also threw up the examples of Ngozi Okonjo-Iweala, Oby Ezekwesili, Sefi Atta and Adichi Chimamanda cannot be said to be deficient in super-brands. Above all, however, the nation that produced the towering presence of Wole Soyinka will lose a rational argument if it pleads the absence of heroes as the basis of failure of Africaâ€™s largest stateâ€, Ribadu said.

The former anti-graft boss warned, â€œIf a new vision is not allowed to takeover our political space, fifty years of our federalism and less of our democracy pose the challenge of what can be an endless rite of passageâ€, adding that in order to avert this danger, young Nigerians must take the responsibility and accountability for leadership of the country from now on.

â€œFrom industry, through civil society to the world of research and development, towards the important crucible of leadership, politics and management of development, I call on fellow young Nigerians today to bury the preoccupation with anger, cynicism and inertia and move in the direction of taking control of the destiny of our nationâ€, he said.

He said although the journey to true nationhood is still far, â€œI feel a great sense of optimism in spite of the obstacles. That is the power of youth. This nation has had its great and low moments, but that is true of all lands in the world. The energy to draw now from those great moments are embedded in our youth, it is demonstrated in the feat we accomplish when we do great deeds and score remarkable goals at home and abroadâ€.

Commending Professor Wole Soyinka for his contributions to the political advancement of the nation, Ribadu declared, â€œFew men in our history epitomize that sense of investment to community than Professor Soyinka. His life work, either as an artiste or public intellectual or even community activist, has been defined by untainted sense of integrity, selflessness and excellenceâ€.

â€œI call on all here today, and the younger generation in particular, to thank him for all he has done for our country and for always being our conscience and missioner for truth and justice, but for which he has suffered exile, death threats and wanton abuseâ€, Ribadu said adding, â€œHere, truly, is one god that made a pantheonâ€.

Earlier in his welcome address, Capâ€™n (President) of National Association of Seadogs, Mr. Emmanuel Bassey said the celebration of Professor Soyinka by the Association was not only because of his 1986 Nobel Prize in Literature, â€œbut especially for his life long struggle for justice and peaceâ€.

â€œBehind his works, through his words and beyond them, he has constructed for over half a century a carapace of scrutiny of the machinery of governance. He has done this so often at great personal riskâ€, the Capâ€™n said adding that the number 13 as in the 13th lecture series â€œportends good fortune for us all as we have the rare privilege of the celebrant with usâ€.

Also present at the occasion were the former Governor of Lagos State, Asiwaju Bola Ahmed Tinubu represented by the Action Congress gubernatorial candidate for Ekiti State in the 2007 election, Dr. Kayode Fayemi, the former Nigerian Ambassador to the African Union, Ambassador Segun Olusola, prominent members and past Capâ€™ns of the Association as well as members of the diplomatic corps and top government functionaries among others.