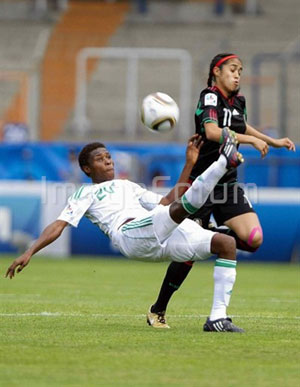 â€¢CLEARED...Osinachi Ohale of Nigeria's Falconets (left) clears the ball away with a bicycle kick as Renae Cuellar of Mexico waits a slip during Wednesday's last group game at the FIFA U-20 Women World Cup in Germany. The match ended 1-1. Photo: AFP.

As Falconets prepare for Sundayâ€™s quarter-final match against the United States of America at the ongoing FIFA U-20 Women World Cup in Germany, Chief Coach, Ndem Egan has charged the Nigerian ladies to attack the Americans from the very blast of the whistle.

The Falconets booked their place in the fuarter finals after finishing second in their group behind Mexico.

Egan believes for the team to have reached this stage of the championship, there is no going back, stressing that the team would adopt a more attacking formation to counter the Americans, who are the defending champions.

The coach admitted that his players were a bit shy in front of goal during their last group match against Mexico in Bochum. But Egan said he had ringed some changes in the team and assured that Nigerians would see a brand new team come Sunday.

Meanwhile, interim president of the Nigeria Football Federation, NFF, Aminu Maigari, has declared that confidence and total seriousness are needed for the team to progress in the tournament.

The Nigerian girls failed to hold onto a lone goal lead against Mexico on Wednesday.

â€œThere is need for the players to have confidence, to give themselves confidence and take the match seriously. There must be improvement in our girlsâ€™ marksmanship. TheyÂ  created so many chances and ended up wasting several of them.

â€œIt is going to be a tough match no doubt. But if they play to their potentials, and are alert and determined for the 90 minutes duration, I believe they can overcome the Americansâ€, said Maigari.

The Falconets will be aiming to become the first team to stop the Americans from reaching the semi finals of the FIFA U-20 Womenâ€™s World Cup since the competition started in Canada eight years ago.

USA lifted the trophy at the expense of host Canada in 2002, won the bronze medal in Thailand two years later, finished in fourth place in Russia four years ago andÂ  pipped North Korea to win in Chile in 2008.

The Nigerian contingent moved from Bochum to their more familiar Augsburg environment yesterday, ahead of the potentially explosive clash.