What Peter Must Do To Defeat Klitschko 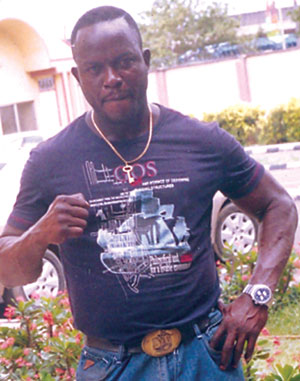 Festac Youth Boxing Club and Academyâ€™s Chief Coach, SholankeÂ  is confident that Samuel ‘The Nigerian Nightmare’ Peter would be lucky this time, if he gets the chance to step into the ring against Wladimir Klitschko, who once defeated him in 2005?

Peter has been given the chance being the second contender to the title after Klitschkoâ€™s long over due mandatory defence against number one contender, Alexander Povetkin whose scheduled fight for 11 September was called off.

With the Nigerian Nightmare having a shot at the title again, Sholanke, who was his sparring partner back in Nigeria, believes Peter has all it takes to reclaim the title but he must be courageousÂ Â  for him to overcome his would be opponent.

Sholanke, who was a former heavyweight boxer, recounted how Peter (34-3, 27 KOs) in his first fight in 2005 sent Klitschko to the canvas on three occasions before losing on points.

He opined that Peterâ€™s camp must go back and watch the tape of the first fight with the view of correcting his mistakes.

According to the former boxer turned coach, â€œwhenever I RECALL Peterâ€™s first fight with the Ukrainian, I thought he would floor him because Klitschko fell to the superior punches of Peter, making him to kiss the canvass on three occasions,.But the Nigerian lost steam and concentration, which made him lose the titleâ€.

Sholanke, a computer engineer, advised Peter and his camp to guard against errors made in the first fight andÂ  change Peterâ€™s approach the fight and style of fight. He argued that Klitschko has a long reach due to his long arms and it would be best for his trainer, Ivaylo Gotzev, to tutor himÂ  to get close to his opponent. This would make it difficult for his punches to land straight on Peter.

â€œI want Gotzev to train Peter how to beat Klitschko because of his long arms, in boxing you have to utilise the strength and weaknesses of your opponent. Klitschko is taller than Peter, so it is best for Peterâ€™s trainer to tell him to come out once in a while, jab his opponent and rush back to his corner because failure to do so may work against him,â€ said the Patron of FESTAC Town Youths Association.

He also warned Peterâ€™s trainers not to allow him feed on fatty foods, advising that the boxer needs meals that are rich in glucose as it would go a long way in helping him to soak up the punches fromÂ  his opponent and also increase his stamina.

Sholanke stated further that it is of high interest for The Nigerian Nightmare to use the proposed fight to revive his dwindling boxing fortunes, having been relegated to the background inÂ  the professional cadre.

On what approach to adopt for the fight, SholankeÂ  told Peterâ€™s trainer to adopt the unorthodox style to send his opponent to the canvass in good time.

In his words: â€œPeter should be ready for the fight of his life because the world titleÂ  could as well be his last chance to make it big in boxing. His coaches must adopt an unorthodox style if he wants to come out victorious in the fight.â€

He charged the Nigeria Boxing Board of Control, NBBof C, to be involved in the politics of the sport, saying: â€œBoxing is not all about exchanging punches in the ring but it also involves politics at the highest level. There are some fights that are already won before the boxers step into the ring, money may have changed hands, so the NBBof C must play along with the politics that go with the gameâ€.

The 6ft 9inch boxing trainer however called on President Goodluck Jonathan to do all within his reach to ensure that the Nigerian boxer reclaims his title by giving him the needed support and encouragement, adding:Â  â€œby the time Peter receives Mr. Presidentâ€™s moral boosting message,Â  he would know that the entire nation is behind him and I know he wonâ€™t let the country downâ€.

Conclusively, he advised Peterâ€™s coaches not to allow the boxer visit Nigeria until after the fight to avoid the recurrence of what happened to him when he was attacked by a family member before he eventually lost the WBC title.

Meanwhile, Peter is already training at Big Bear, California, and Gotzev said they are eager for another opportunity against Klitschko, especially after Peter hadÂ  such a poor performance when he lost his version of the title in an eight-round Technical Knock Out, TKO to Vitali Klitschko, Wladimirâ€™s brother two years ago in Germany.