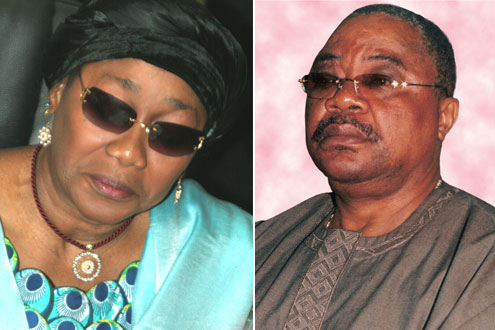 Security has been beefed up in Ibadan, the Oyo State capital, South-West Nigeria, following the tension caused by the refusal of Alhaji Lateef Salako a.k.a. Eleweomo to obey an industrial court order asking him to vacate the office of the Chairman of Oyo State branch of the National Union of Road Transport Workers, NURTW.

The court ruled that he had illegally taken over the office from Alhaji Lateef Akinsola Oloruntoki, a.k.a. Tokyo.

Eleweomo is not only sitting tight at the NURTW chairmanâ€™s office situated at Olomi Area of Ibadan, he is also parading himself as the chairman of the union contrary to the court order.

Eleweomo, last Friday at a press conference vowed that he would not leave office, adding that he was validly elected by NURTW members and installed by the national body.

He said his lawyers have filed an appeal against the order given by the industrial court as well as seeking a stay of execution of judgment.

Eleweomo, who has been reportedly sighted several times at the Oyo State Governorâ€™s office, P.M.NEWS reliably gathered, is seeking the support of Governor Adebayo Alao-Akala to remain in office.

However, this morning, NURTW members were seen trooping into the residence of Tokyo to felicitate with him as the court ordered that he should resume as NURTW chairman in Oyo State.

As at the time of filing this report, thousands of Tokyoâ€™s loyalists gathered at his residence singing his praise and hailing him.

However, Tokyo had disclosed to newsmen in Ibadan that he has concluded arrangement to peacefully take over the leadership of the union.

Armed policemen with armoured personnel carrier have been deployed to strategic areas of Ibadan.

As at the time of filing this report, the Commissioner of Police in Oyo State, Alhaji Adisa Baba Bolanta was holding a secuirty meeting with top police officers in the wake of the tension brewing over who occupies the NURTW office.

P.M.NEWS reliably gathered that top on the agenda of the meeting is how to curb any crisis that NURTW members may foment.

Bolanta last week disclosed that the legal department of the police force was studying the judgment and once they gave him direction, he would take action.

He, however, allayed the fears of the people, saying that police would not allow NURTW to intimidate any citizen.

He asked law abiding people to go about their normal duties without any fear of molestation..

Tokyo was forcefully removed by NURTW body at the national and state levels in collaboration with the state government which perceived that he was working with Ibadan indigenes to thwart the second term bid of Akala.

Sources told our correspondent that after Akala had begged Tokyo to peacefully leave the office and he refused, the governor allegedlyÂ  plotted his removal.