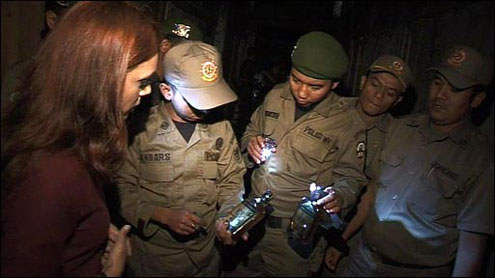 Islamic police smashed 80,000 bottles of beer in the Nigerian city of Kano on Tuesday to enforce a sharia law ban on consumption of alcohol that exists in much of the countryâ€™s north.

Over a dozen veiled female sharia police, called Hisbah, destroyed the beer bottles with sticks amid shouts of â€œAllahu Akbarâ€ (God is Great) on the outskirts of the northern city in a ceremony.

The ceremony was attended by government officials as part of â€œefforts to rid the state of immorality,â€ said Kano state Hisbah chief Saidu Dukawa. Kano city is the capital of the state by the same name.

â€œThe sale and consumption of alcohol, like all forms of drugs and intoxicants, is illegal in Kano state, which practices sharia law and by this event we are enforcing that ban,â€ Dukawa told AFP.

Thirteen trucks brought the bottles of beer to the venue.

The alcohol had been seized at the weekend by sharia police as the bottles were being delivered to the city from the mainly Christian south, where most of the countryâ€™s breweries are located, Dukawa said.

Although the sale and consumption of alcohol is banned in Kano state, beer trucks find their way to taverns in the predominantly Christian Sabongari neighbourhood, which is practically exempt from sharia law.

Since 1999, when Nigeria returned to civilian rule after years of military dictatorship, around a dozen states in the predominantly Muslim north have reintroduced Islamic sharia law, though it has been selectively applied in many cases.

Nigeria is Africaâ€™s most populous nation, and roughly half of the 150 million population is Muslim.