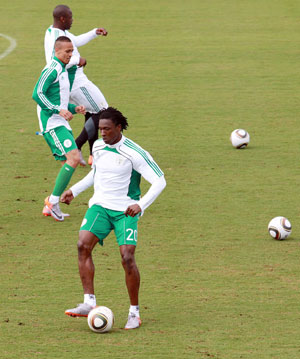 â€¢IN TRAINING...Super Eaglesâ€™ Dickson Etuhu, Osaze Odemwingie and Danny Shittu sweat it out during a recent training of the team. The Nigerian team tackle South Korea in an international friendly match in Seoul tomorrow. AFP Photo.

Super Eagles care-taker Coach, Austin Eguavoen has been drilling the players in camp ahead of tomorrowâ€™s international friendly match against the Korean national team in Seoul.

Russia-based Obafemi Martins, the last player to join the team arrived at the nick of time when Eguavoen took them through a rigorous training yesterday and early this morning.

Fulham of Englandâ€™s Dickson Etuhu, Danny Shittu and Uche Kalu are among the foreign-based players who joined the Akpan Bassey-led players drawn up from the Nigeria Premier League for the teamâ€™s first encounter after their poor outing at the FIFA World Cup held in South Africa.

Before leading the Eagles out of Nigeria last weekend, Eguavoen said he expects the players to show the stuff in them by taking the game to Korea.

He believes the Nigerian senior team now have a great opportunity to play themselves back into reckoning and play well to woo back the soccer loving Nigerians, who no longer believe in the them.

â€œEaglesâ€™ performance against Korea will go a long way in changing the minds of Nigerians about the teamâ€™s future. The players themselves have been talking about a positive change of attitude and I expect them to prove that in Wednesdayâ€™s match against Koreaâ€, Eguavoen told P.M.Sports.

However, the Koreans, who made it to the second round of the 2010 World Cup in South Africa from the same group where Nigeria crashed after the preliminary stage, reunited yesterday.

While the tie is seen as just a friendly match, the pressure is high for Coach Cho Kwang-rae, as it marks his debut as new coach. The players, who play in overseas leagues including captain Park Ji-sung of Manchester United and Park Chu-young of AS Monaco have landed for the game against Nigeria.

Park Ji-sung flew back immediately after playing in the English Football Association Community Shield between his club, United and Chelsea at Londonâ€™s Wembley Stadium last weekend.

In a press conference at the NFC, Cho said: â€œAs theyâ€™re in good shape, most of those who played against Nigeria in the World Cup will play from the first half. Then, I plan to put in some new players in the second half of Wednesdayâ€™s match as part of our preparation for the 2011 Asian Cup and the 2014 World Cup in Brazil.â€