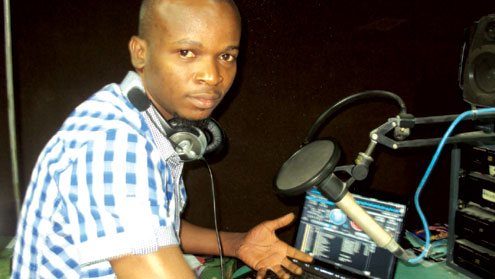 One of Nigeriaâ€™sÂ  leading DJs, Ayeni Ismail popularly known as DJ Slam (the turntable wizard), has concluded his talent hunt show, which was geared towards discovering raw talents in his neighbourhood, Agege, Lagos.

The show, which lasted for about four days, saw Davidâ€™s Heart and Max Boi emerge as winners from the dancing and singing categories respectively.

Davidâ€™s Heart is a group of young and creative male dancers that smiled home with N80,000 from the competition, while Max Boi, an upcoming singer, got a recording deal and cash prize of N100,000 as the winner of the singing category.

Held at the Amoo Playing Ground, Agege, the show was sponsored by Honourable Adeniji Kassim and was anchored by a top radio and TV presenter, Fresh Prince.

Some of the judges at the competition included Konga, Helen â€˜Tatafoâ€™ Paul and Klever J, to mention a few.

Speaking with P.M. Entertainment, DJ Slam, who is currently with Star FM, noted that the show is just a way of giving hope to the youths in his vicinity.

â€œWe need to engage them positively and by so doing, the level of social vices will be reduced among them. It is also our little way of giving back to the society,â€ he said.