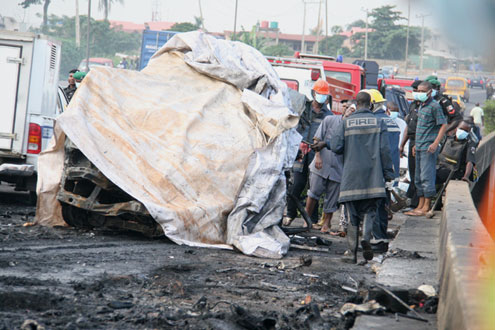 The accident, which according to Lagos State Government sources, happened around 11 a.m. close to the old toll gate along the Lagos-Ibadan Expressway.

The vehicles involved in the crash were burnt while some of the passengers traveling to various parts of Nigeria lost their lives.

Sources at the scene of the incident said that the accident was caused by some policemen who mounted a check point on the busy highway.

When the policemen stopped some vehicles, P.M.NEWS learnt, a truck conveying bags of salt ran into some of them and instantly burst into flames.

When P.M. NEWS visited the scene of the incident, several government officials were assisting in the evacuation of corpses into a waiting ambulance.

Dr. Oke Osanyintolu, the Lagos State Emergency Management Agency (LASEMA) boss, said they were able to get to the scene early and that the agency was able to rescue 25 people.

He said at least 25 people lost their lives.

The spokesman of the Lagos State Police Command, Frank Mba, who was at the scene of the accident declined to speak with our reporter.

He claimed that he was too busy with restoring normalcy at the scene where the accident caused severe traffic jam.