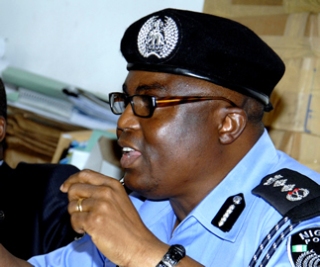 P.M.NEWS gathered that the robbers arrived the bank around 11: 00am in two cars and were shooting into the air before they eventually gained entrance into the banking hall.

The robbers were about six and the operation which lasted for over thirty minutes resulted in a serious gun duel between them and a Mobile Police officer who was in the bank to transact business.

An eyewitness account revealed that the robbers successfully carted away a lot of money.

â€œWhen the robbers arrived, they destroyed the entrance of the bank which made it easier for them to gain entrance into the bank. A MOPOL officer who just left now, he single handedly engaged the robbers in a gun battle.

“He was in the bank to withdraw money. He told us that he was calling other policemen to join him fight the robbers but they didnâ€™t come. He even said that if his boys had come to joined him, they would have dislodged the robbers,â€ an eyewitness told our correspondent.

The eyewitness continued, â€œWhen the robbers finished their operation, they escaped through Odutola road, by Zenith Bank, down to Bonojo street to Moborode road and fled through Imoru town to the Epe Expressway. A boy was hit by the bullet opposite the bank, as the boy was in GEMA, a restaurant beside Mr Biggs. He has been rushed to the an unknown herbalist in Ijebu Igbo.â€

When our correspondent visited the area, people were seen discussing the incident. Policemen were also at the bank with almost five vehicles led by the Area Commander of Ijebu Police Division, ACP Christopher Obagunle.

Investigation revealed that the Governor of Ogun State, Otunba Gbenga Daniel who was in Ijebu-Ode for a meeting called at the scene of the incident.

A source who pleaded anonymity told our correspondent that the crowd also stoned the local security outfit in Ijebu-Ode, Obanta Safe & Secure Vigilance group who came to the scene after the robbers had left.

According to the source, “the Obanta boys also came and wanted to behave somehow. Though they are trying, they canâ€™t say that they didnâ€™t hear the gunshots. Why are they now coming when the robbers had left? We stoned them and chased them away. We have put our fate in our hands. Nothing can be done by these people, but God will protect us,â€ he concluded.

It was gathered that the gallant Mobile Policeman who attacked the robbers was carried shoulder high by the people who were showering encomiums on him. They, however, called on the government to compensate him.

All efforts to get the MOPOL officer proved abortive as it was gathered that he left the scene on a motorbike immediately the governor left.

Speaking with our correspondent, the Area Commander of the Ijebu Police Division, Christopher Obagunle confirmed the incident and stated that no person was killed during the operation.

He further stated that the Commissioner of Police in the state, Musa Daura had gone to Ijebu-Ode for on-the-spot assessment.

The management of the bank could not be reached for comment as the bank had sealed its destroyed entrance with plywood.

Also, all banks in Ijebu-Ode immediately closed for the day to avoid being attacked by the robbers.

As at the time of filling this report, the Commissioner of Police was with the Area Commander in his office in Igbeba discussing the issue after he had visited the bank.

The CP was accompanied to Ijebu-Ode by the police spokesman in the state, Muyiwa Adejobi and other senior officers.