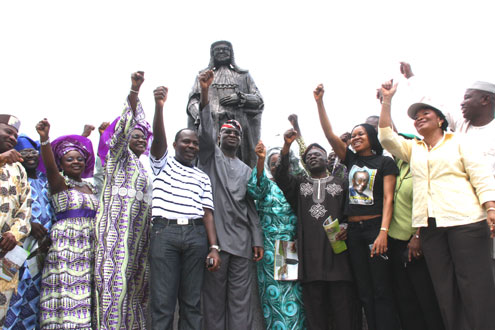 â€¢Governor Babatunde Raji Fashola of Lagos State (m), Chief Gani Fawehinmi family members and some human rights activists at the commissioning of a park at Ojota in honour of Gani and to mark his one yearâ€™s remembrance, yesterday in Lagos. Story on pg.6

To mark the first anniversary of the death of legal icon, Chief Gani Fawehinmi, Lagos StateÂ  Governor, Mr Babatunde Fashola (SAN) on Sunday unveiled the statue of the legal luminary andÂ  also dedicated a memorial garden, stressing that government took the step as a token ofÂ  appreciation for a life of leadership through Spartan service to humanity that he lived.

According to Governor Fashola who spoke at the Triangular Layby opposite Owena Motor Park,Â  Ojota, â€œthe State Government is trying to demonstrate to others that it will not forget itsÂ  heroes in the belief that some new leaders will hopefully be inspired to rise up andÂ  continue from where he left offâ€.

Said he: â€œThe task is not completed. There is sweat and toil ahead. Our persistence andÂ  patience will be severely tested, but we are irrevocably committed to pursue our dream of aÂ  brighter rewarding futureâ€.

He urged all Nigerians to always give suggestions to leaders and ensure that they getÂ  involved in the process of governance, stressing that elected leaders are just like everyÂ  other citizen.

The Governor explained that: â€œLate Chief Ganiâ€™s patriotism was not whimsical, but a devotionÂ  of a whole lifetime. It was an arduous devotion to a cause from which many have derailed orÂ  turned back. It is never easy to stand up for principles, especially when you stand aloneâ€.

â€œGani committed a lifetime of 40 years of the prime of his life to this arduous devotion. HeÂ  used law, civil rights movements, the media and politics as his tools to liberate the peopleÂ  he cared so passionately about from ignorance, repression and poverty; until he succumbed toÂ  his own mortalityâ€, he added.

The Commissioner for the Environment, Dr Muiz Banire in his address described late ChiefÂ  Gani Fawehinmi as an hero who was frantically energetic and courageous while hisÂ  contributions to the law practice apart from court appearances were legendary and enduring.

He informed the gathering that taking over of the loop was not a tea party as it had toÂ  contend with miscreants and street urchins, adding that those who are familiar with theÂ  location would recall that it used to be a launch pad and hideout for criminals whoÂ  terrorized motorists and commuters plying the Ojota axis

In his solidarity message, Governor of Edo State, Comrade Adams Oshiomhole who wasÂ  represented by Dr Osagie Obayuwana commended Lagos State for honouring late Chief FawehinmiÂ  just as Edo State has done, adding that every Nigerian needs to be guided by the examplesÂ  set by Gani in confronting several issues.

He added that now is the time for pro-democracy groups and activists to embrace the doctrineÂ  of engagements, saying the days of writing letters and protests should be done away with.

Dr Odumakin added that the greatest memorial that Nigerians can do to him is to live for theÂ  virtues he lived and died and ensure that everyone gets engaged in the governance process.

Dr Odumakin also tasked Nigerians to do background check on those that they would vote forÂ  as leaders.

The National Publicity Secretary of the Action Congress of Nigeria, Alhaji Lai Mohammed whoÂ  also attended the event said late Chief Gani was a humanist who sacrificed his all for theÂ  today of the average Nigerian.

He described the ceremony as a milestone in the history of the human rights family inÂ  Nigeria as the late Chief was one exemplary activist who stood on the side of the massesÂ  till his death.

In his address, the National Chairman of the National Conscience Party and close ally ofÂ  late Chief Gani Fawehinmi, Mr Femi Falana thanked the Lagos State Government for celebratingÂ  a man of integrity like Chief Fawehinmi who stood and identified with the poor.

While expressing the appreciation of the family, eldest son, Mr Mohammed Fawehinmi thankedÂ  the Governor of Lagos State for the honour done to the Fawehinmis, adding that GovernorÂ  Babatunde Fashola (SAN) is the best Governor he has ever come across.

He said with strategic location of the garden, Chief Gani Fawehinmi will live in the mindsÂ  of the masses, adding that Lagos State Government has placed the family on the world map.

The event was attended by many dignitaries including members of the State Executive Council,Â  widow of late Chief Gani Fawehinmi, Chief Mrs Ganiat Fawehinmi, children, members of theÂ  family and human rights activists.