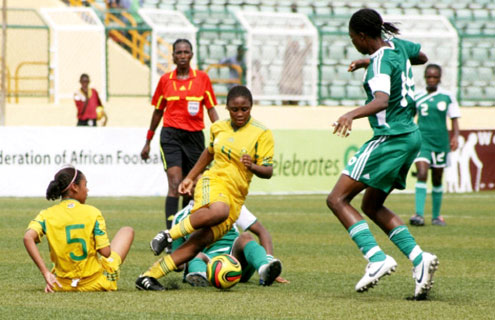 â€¢Action during the second group match between Nigeria and Trinidad & Tobagoâ€™s at the ongoing FIFA U-17 Womenâ€™s World Cup.

With Nigeriaâ€™s Flamingoes securing their place in the quarter final of the ongoing FIFA U-17Â  Womenâ€™s World Cup, one of the players, Francisca Ordega, sees the team playing in the final.

Ordega told FIFA.com that she prefers the FlamingoesÂ  to meet the German team in the final.

â€œI hope we can go as far as possible in the competition and make the people of Nigeria proudÂ  of us. Weâ€™re a disciplined and tightly knit team thatâ€™s good on the ball and weâ€™veÂ  definitely got what it takes to succeed.â€

â€œIt would be perfect to meet Germany in the final,â€ she adds, going on to explain theÂ  reasons behind her preferred choice of opponent. â€œThey beat our big sisters in the U-20Â  final and they beat us 5-2 in a warm-up match for this World Cup. It would be good to setÂ  the record straight.â€

It was only a few weeks ago that Nigeriaâ€™s Falconets surprised everyone by taking theirÂ  place in the final of the FIFA U-20 Womenâ€™s World Cup Germany 2010. Picking up where theirÂ  elders left off, the countryâ€™s high-flying Flamingoes are charting a similar course atÂ  theÂ  U-17 Womenâ€™s World Cup by winning their opening two matches in Group A to soar into the lastÂ  eight.

Starting out with a 3-2 victory over title holders Korea DPR, the young Nigerians followedÂ  up with a 2-1 defeat of the tournament hosts, scorelines that barely reflected theirÂ  domination of both games. Adopting a 4-3-3 formation, the powerful yet cultured AfricansÂ  have been in scintillating form in the Caribbean, with the likes of Ngozi Okobi, HalimatuÂ  Ayinde, Loveth Ayila and speedy forward Francisca Ordega, the scorer of two goals to date,Â  all impressing.

â€œWe are the favourites. To my mind we are the best team there is. Itâ€™s wonderful to beÂ  here,â€ saidÂ  the Bayelsa Queens forward, clearly enjoying the experience.

â€œTo be taking part in this World Cup is a fantastic opportunity and Iâ€™ll never forgetÂ  everything thatâ€™s happening to me here.â€