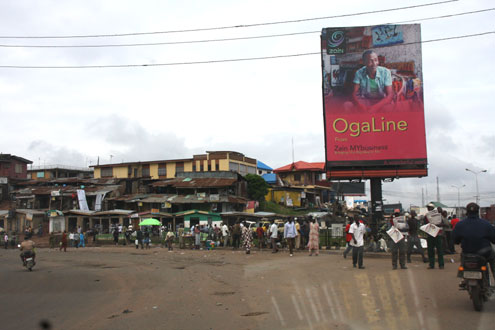 â€¢Commuters stranded at Ibadan this morning following the boycott of motor parks by bus operators after yesterdayâ€™s mayhem.PHOTO: AKIN FARINTO.

Many commuters were stranded at various bus stops while others resorted to begging privateÂ  car owners to give them a ride.

Many were seen trekking long distances to their various destinations.

In places like Iwo Road, Sango, Ojoo and Mokola visited by P.M.NEWS this morning, commercialÂ  activities were totally paralysed.

It was gathered that some hoodlums clashed again at Ojoo but it was quelled by the police.

Armed policemen and armoured personnel carrier have been deployed at strategic positionsÂ  near the troubled spot to forestall further mayehm.

Speaking on the crisis, Deputy Governor of Oyo State, Alhaji Taofeek Arapaja promised a fullÂ  fledged investigation into the issue.

Commenting on the crisis, the Oyo State Command Police Public Relations Officer, PPRO, DSPÂ  Bisi Okuwobi assured the public of their security, stressing that the police are on top ofÂ  the situation as the necessary security measures have been put in place to guarantee theÂ  safety of the citizens.

Meanwhile, an Oyo State High Court sitting at Ring Road, Ibadan yesterday dismissed theÂ  application filed by reinstated Akinsolaâ€™s major rival, Eleweomo to be joined as a defendantÂ  in the suit filed by Tokyo against the Oyo State Governor Adebayo Alao Akala and the stateÂ  Commissioner of Police to enforce his reinstatement.

Justice Olagunju ruled that the applicants have failed to prove what they stood to gain orÂ  lose if they were not joined as defendants in the suit.

He adjourned the substantive suit till 18 October, 2010.