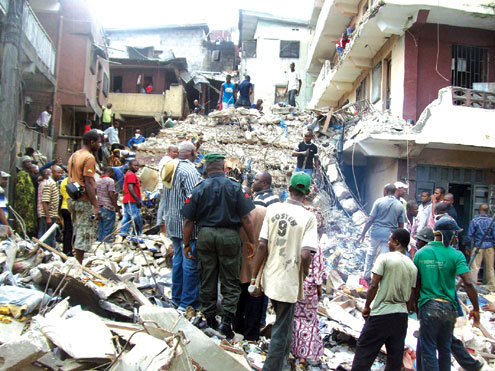 The Baale of Maidan near Mile 12 in Kosofe Local Government Area of Lagos State, Chief Idowu Ogunjobi, has fled the town as his building collapsed and killed two occupants of the shops in the building.

The victims, who are traders in the shops, which are extension of the baaleâ€™s two-storey building, were a yet to be identified man and another called Uche.

Francis Obinna, a deputy superintendent, Head of Disaster, Nigerian Civil Defence Corps, confirmed the numbers of those who died to our reporter.

P.M.NEWS gathered that the construction of Mile-Maidan road had affected about half of the shops in front of the baaleâ€™s residence as they were partly demolished to pave way for the construction. However, the traders continued to display their wares inside the affected shops and often stayed inside the dilapidated structure.

As the block of shops caved in, two of the traders were badly injured and were rushed to the hospital. But they died shortly before help could come. The third victim is still receiving treatment at a nearby hospital.

It was gathered that a contravention notice had been served on the baale by the Lagos State Ministry of Physical Planning on the ground that the building was defective and had partly collapsed. No permit was issued or building plan approved for the building.

When P.M.NEWS visited the scene this morning, policemen, civil defence corps and other agencies were on the site for rescue operations and necessary assistance to the victims.

Victims of the four-storey building which collapsed at 24 Alli Street, off Tinubu Square, Itafaji, Lagos, Nigeria, have confirmed that the house had shown signs of collapse before it eventually came down.

The building had collapsed with about 20 people including traders, aged men and women inside it. No life was lost as officials of the Lagos State Emergency Management Agency, LASEMA and residents of the area rescued the trapped victims.

A resident of the area, Yusuf Agbaje, said the house collapsed at about 05.15p.m. yesterday while the residents were returning to the house and the traders were trying to close for the day.

â€œI was on my way back from the office when suddenly I heard a deafening sound which immediately reduced the massive structure to rubble.Â  It came just like what happened in 2009 when the Lagos State Government demolished the Bank of Industry building,â€ he said.

Agbaje said the building, constructed about 17 years ago by a private developer, whose name he gave as Salvador, was only completed and released to the owner about two years.

â€œThe state government had marked the building for demolition either because of its structural state or non compliance with the stateâ€™s property standard,â€ he added.

A survivor, who gave his name as Taju, said some of the occupants of the property, especially those who were on the fourth floor when it collapsed, escaped, while those on the other floors were not so lucky.

He said: â€œI live in this building and we have been discussing with Mr. Wasiu, our landlord to refund our money because we want to park out of the house, since the Lagos state government has come to mark the house on the ground that the building did not get approval for four floors.

â€œBut he refused. If he had given me back the money I paid to him as rent I would not have lost my belongings to the collapse,â€ Taju said.

Another eyewitness, an old woman called Iya Ayoka Olounoje selling petty things opposite the collapsed building, said the developer of the property who is now deceased, had also developed other properties that are already collapsing in the area. She advised that a task force be constituted to appraise some of the recently built houses in the area to ascertain their structural integrity.

Tajudeen Ademola Adeyanju said it was God that saved him and his family, adding he was just taking his two children out of the house when it came down.

He said a 90-year old resident of the building, Falilatu Salami, who was also rescued is receiving treatment with other victims at the Lagos General Hospital.