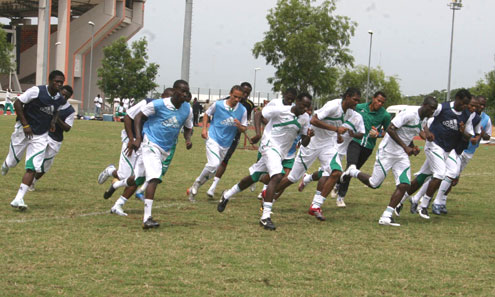 â€¢RACE AGAINST TIME... A file photo the Super Eagles show the team in training before a match. The Eagles, yesterday continued with their training in Abuja despite the ban on Nigerian football by FIFA. Photo: Femi Ipaye.

FIFA, on Monday suspended all international football activities involving Nigerian teamsÂ  because of what the body described as governmentâ€™s interference.

With the FIFA ban still on Nigeria, the Eagles and other national teams are not expectedÂ  to feature in any competition including friendly matches.

But, skipper Joseph Yobo and his teammates who have since reported at the Abuja campÂ  continued to train for the away match in Guinea which is in doubt.

Yobo, who made a passionate plea to Nigeriaâ€™s sports authorities to ensure that the FIFAÂ  ban on the country is reversed immediately said the Eagles have resolved to get in topÂ  shape for the cracker in Guinea.

The Caretaker Coach, Austin Eguavoen and Yobo are about now concluding a meeting with theÂ  Nigeria Football Federation, NFF, scribe at the Glass House in Abuja, where both partiesÂ  would agree on the next line of action.

Nigerian football has been dogged with in-fighting, court injunctions and governmentÂ  interference for months after the dismal performance of the Eagles at this yearâ€™s FIFAÂ  World Cup in South Africa.