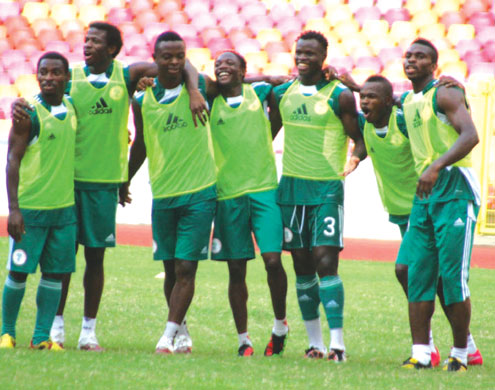 â€¢ECSTACY... Super Eagles skipper, Joseph Yobo (far right) and other players in an expectant mood after their training at the Abuja National Stadium yesterday. The Eagles believe the FIFA ban on Nigeria will be lifted today. Photo: Femi Ipaye.

There is hope that the Super Eagles and other Nigerian teams would return toÂ  international football any moment from now, as the Federal Government has agreed toÂ  reverse the decisions which led to Mondayâ€™s ban by FIFA.

It was the second time in a year that Nigeria would bow to the superior powers of theÂ  Federation of International Football Federation, FIFA, that cited government interferenceÂ  as its reason for banning Nigeria indefinitely from international football competitions.

P.M.Sports gathered early today that the the Nigerian government has called on allÂ  factions involved in the lingering crises rocking Nigerian football to sheathe theirÂ  swords, while a special Presidential delegation, to be led by FIFA Executive CommitteeÂ  member, Dr. Amos Adamu was due in Zurich to lobby FIFA and ensure that the suspension onÂ  the country is lifted.

The move started shortly after FIFA suspended Nigeria due to court actions against theÂ  elected members of the Nigeria Football Federation, NFF Executive Committee, who were notÂ  allowed to exercise their functions and duties.

FIFA categorically stated that the suspension will be maintained until the court actionsÂ  have ceased and the duly elected NFF Executive Committee is able to work without furtherÂ  interference by the government.

The cheery news however is that the court action instituted against the NFF by theÂ  National Association of Nigerian Footballers, NANF, which led to the cacellation of theÂ  elections of Alhaji Aminu Maigari and his board has been withdrawn from the Federal HighÂ  Court.

Also, the NFF Acting Secretary General, Musa Amadu, who was sacked by the National SportsÂ  Commission, NSC has since been recalled to his duty post.

Also set to be reversed is the decision of the NSC, which ordered the Nigeria PremierÂ  League, NPL board not to relegate any team from the previous season.

Feelers from the House Committee on Sports, the House of Representatives in Abuja alsoÂ  revealed that the world football governing body will reverse its suspension on Nigeria,Â  assuring that the Super Eagles would continue with their qualifying matches andÂ  participate in the next African Cup of Nations slated for Gabon/Equatorial Guinea inÂ  2012.

Meanwhile, Eagles skipper, Joseph Yobo said he and his teammates are disturbed about theÂ  current impasse in Nigerian football. But the Fenerbache of Turkey defender said theÂ  players have continued with their training in Abuja with theÂ  hope that FIFA would liftÂ  its ban on Nigeria before their match against Guinea.

FIFA handed a similar threat to ban Nigeria when President Goodluck Jonathan announcedÂ  the withdrawal of all the national teams from international competitions due to theÂ  dismal performance of the Super Eagles at the World Cup held in South Africa in June.