K-1 Thrills At The Felabration 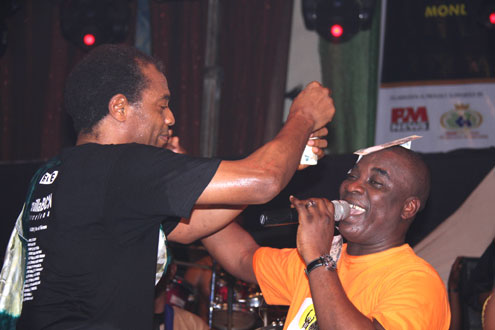 As soon as the Fuji King mounted the stage at about 12-15 am with the song â€˜awade o, awa niâ€™ there was no dull moment as fuji fans sang along the choruses with him.

For about two hours, K-1 dished out his old and new tunesÂ  to the delight of his fansÂ  who savoured every moment of it.

An impressed Femi and Yeni Kuti could not help but join him on the dance floor. FemiÂ  sprayed him with crisp naira notes on his forehead.

Today, which is day four of the on going Felabration , popular female singer Asa, Sound Sultan, Keziah Jones, Tony Allen and others will perform.

Internationally acclaimed, Makossa King,Â  Awilo Logomba will arrive Nigeria today and all things being equal he will be playing during the weekend .