The Frills And Thrills Of Golden Tunes Concert 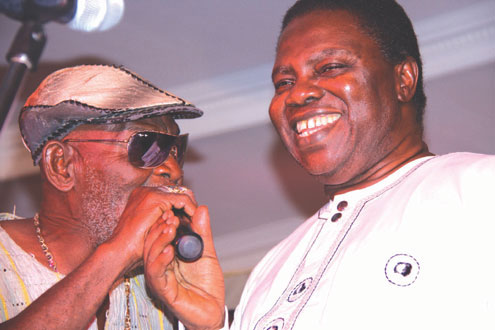 â€¢Fatai Rolling Dollar and Ebenzer Obey in a duet at the concert.

Top juju musician turned evangelist, EbenezerÂ  Obey Fabiyi, has described the Night of the Golden Tunes Concert as one that will be remembered for bringing together music stars of yesteryears.

Tagged Lifetime Achievement Awards, the event, according to Femi Eso, was to reward those that contributed to the growth of highlife music since independence and also bring back the memories of the music of yesteryears, saying â€œit is time to celebrate the efforts of our music legends. Their music must not die with them.â€

One significant aspect of the show was the fact that it paraded an array of old school stars that reminded people of the good old highlife music and with a touch of class. It was indeed, a night to remember.