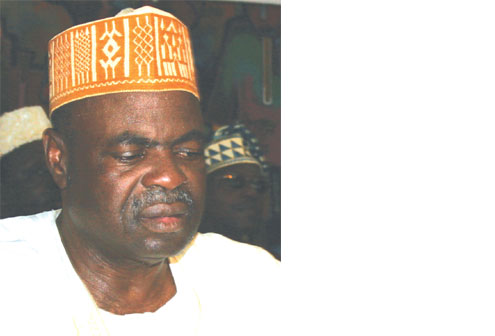 There are strong indications that the bribery scandal involving Amos Adamu has stalledÂ  the 2018 World Cup bid process, as the Federation of International Football Association, FIFA is set to postpone the vote fixed for 2 December this year.

FIFA had reacted and ordered an immediate investigation into the findings of a Sunday Times undercover team, which posed as English-based lobbyists for an American consortium wanting to take the World Cup to the USA.

A report said the undercover team secured tape and film evidence of Adamu asking for Â£500,000, about $800,000 to be paid to him personally, to build four football pitches in Nigeria.

The report futher said that Tahitiâ€™s Reynald Temarii, President of the Oceania Football Confederation, asked for the sum of Â£1.5million to finance a sports academy and also boasted that Oceania had been offered between Â£6m and Â£7.5m by supporters of two unnamed bidding countries, an allegation that FIFA is probing because of the suspicion it throws on the nations competing to host the 2018 and 2022 World Cups.

A visibly disappointed FIFA President, Joseph Sepp Blatter said in a letter sent to the 24 Executive Committee members including Adamu, that the bribery scandal had had a â€˜very negative impactâ€™ on the world governing body.

â€œI am sorry to have to inform you of a very unpleasant situation, which has developed in relation to an article published in the Sunday Times titled â€˜World Cup votes for saleâ€™. The information in the article has created a very negative impact on FIFA and on the bidding process for the 2018 and 2022 FIFA World Cups. Some current and former members of the Executive Committee are mentioned in the article,â€ Blatter said in the letter.

It appears that further discussion on the World Cup bidding process would be stopped until investigations are concluded on the allegations levelled against Adamu and the other senior member of FIFAâ€™s Executive Committee, Temarii.

Blatter, Secretary General Jerome Valcke and their legal team have been meeting at the FIFA Secretariat in Zurich, where Adamu and Temarii are being interrogated over the bribery scandal.

The ethics committee, which rule on breaches of bidding regulations are also due to meet in another stormy session on Wednesday, 20 October, where the serious allegations against Adamu, who allegedly asked for the cash to be paid to him directly would be discussed.

It was gathered that Adamu is expected to be suspended before the full FIFA Exco meeting on Wednesday, 27 October. According to the London nespaper, Adamu, President of the West Africa Football Union, was asked on video whether payment for a â€˜private projectâ€™ would have an effect on his World Cup vote. He replied: â€œOf course it will, because certainly if you are to invest in that, that means you also want the voteâ€.

The bribery scandal involving Adamu however came as a rude shock to soccer loving Nigerians, as the Presidency has summoned both the Nigeria Football Federation, NFF, and National Sports Commission, NSC, chieftains to brief it on the development.