Nigerian Stars Vow To Fight On 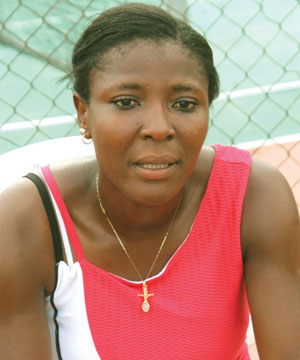 Two Nigerian players, who put up impressive performances to cruise to the secondÂ  round of the 10th Governorâ€™s Cup Lagos Tennis Championship, believe they have whatÂ  it takes to make strong impact in the ITF approved tourney this year.

Nigeriaâ€™s Davis Cup player, Abdulmumini Babalola, and CBN Open womenâ€™s singlesÂ  champion, Fatimah Abinu, proved bookmakers wrong in the first round of the MainÂ  Draws, when they upset ranked foreign players in their respective matches in FuturesÂ  1 of the tourney .

Babalola said: â€œI believe I can do it this time around. There is no big deal in theÂ  games of the foreign players. If only we can raise our games a little, we can alwaysÂ  beat them.â€

Abinu, who will be facingÂ Â  tournament number one female player, Kucova Zuzana, inÂ  the second round match, said she was not afraid of the Slovakia player who won bothÂ  Futures 1 and 2 last year.

â€œIâ€™m not thinking much of my next match. Iâ€™ll take the matches as they come. Iâ€™m notÂ  afraid of my second round opponent, Iâ€™m ready to play my game,â€ she said.

Meanwhile, the opening ceremony of the Governorâ€™s Cup Lagos will be held today. TheÂ  briefÂ  informal ceremony will start by 3p.m. at the Lagos Lawn Tennis Club, Onikan.

According to the Tournament Director, Prince Wale Oladunjoye, officials of theÂ  sponsors, Etisalat Nigeria and FCMB Plc, have been invited to be part of theÂ  ceremony.

â€œThough the tournament has begun since 15 October, the opening ceremony will be aÂ  brief event to declare the 10th edition of the championship opened

â€œUsually, it is not a big event unlike the closing ceremony. We are expectingÂ  officials of our major sponsors to be part of the event and other invited guestsÂ  from the Lagos State government,â€ said the Senior Special Assistant on GrassrootsÂ  Sports to Governor Babatunde Raji Fashola.