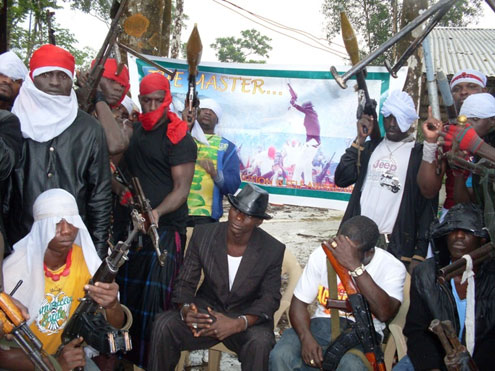 Nigeriaâ€™s main militant group, the Movement for the Emancipation of the Niger Delta,Â  said its fighters blew up a pipeline that supplies crude to the countryâ€™s WarriÂ  Refinery.

The attack on the link to the 125,000-barrel-a-day refinery took place on Nov. 21,Â  Jomo Gbomo, a spokesman for the group known as MEND, said in an e-mailed statementÂ  today. The â€œattack and similar attacks on pipelines which will take place within theÂ  next few daysâ€ are to show â€œthe futility of wasting the nations resources inÂ  combating militancy without addressing the underlying causes of agitation in theÂ  Niger Delta.â€

A pipeline belonging to the Nigerian National Petroleum Corp. was sabotaged, LeviÂ  Ajuonuma, a spokesman for the state- owned energy company, said yesterday withoutÂ  giving details on the operations of the refinery. Nigeria is the fifth-largestÂ  source of U.S. oil imports.

The southern Niger delta, which is home to nationâ€™s oil and gas industry, has beenÂ  hit by a surge of violence in recent months after a period of relative calm thatÂ  followed a government amnesty in 2009 and the disarming of thousands of militantÂ  fighters. In response to the attacks, the Nigerian army ordered an offensive againstÂ  rebels last week.

The pipeline that supplies crude to the plant in Warri is also the source of oil forÂ  the refinery in the northern city of Kaduna. The 110,000-barrel-a-day KadunaÂ  refinery is operating after a minor glitch, Ajuonuma said.

Nigeriaâ€™s four state-run oil refineries are producing at about 30 percent ofÂ  capacity, the Department of Petroleum Resources that oversees the countryâ€™s oil andÂ  gas industry said on Nov. 15. Africaâ€™s biggest crude producer relies on fuel importsÂ  for more than 70 percent of its domestic needs, according to the Petroleum Ministry.

MEND says it is fighting for local control of oil revenue by the ethnic minoritiesÂ  of the delta, alleging domination by Nigeriaâ€™s majority ethnic groups.