Okocha, Siasia, Others In Tears, As Okafor Goes Home 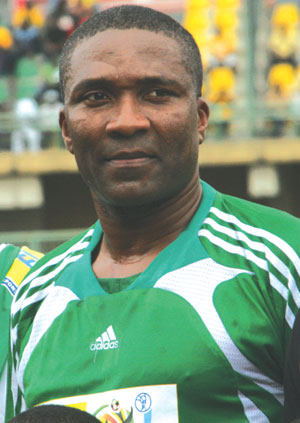 The former ACB Bank of Lagos defender was found hanging in his home in Texas, USA last month. All the former Eagles players, who played a commemorative novelty match that ended 1-1 at the Dan Anyiam Stadium, Owerri to bid their departed colleague farewell fought back tears as he was buried.

Okocha and Siasia played with the deceased when Nigeria won the Tunisia â€™94 Nations Cup and also featured in the same team paraded by Nigeria at her first ever World Cup in USA ’94.

Okocha, a member of the Delta State Football Association could not stand it when the casket used to cover the remains of Okafor was being conveyed by his former teammates.

Even Okafor’s widow, Ifeyinwa, her daughter, Tochukwu, the delegation from the Nigeria Football Federation, NFF and sympathizers present wailed on sighting the corpseÂ  during the lying in state.

The former Bolton Football Club of England skipper, Okocha however made a passionate appeal to the Federal Government, begging that the stars of yesteryears should not be forgotten in a hurry. He wants their dues given to them when they are alive.

He said; â€œThis is our biggest problem in Nigeria. It seems that we do not get our rewards when we are still alive. It is sad because it does not encourage the younger generation of Nigerian players.”