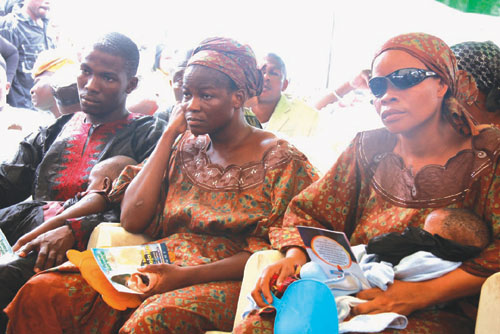 â€¢Wives of the late Ishola Durojaiye during the burial. .

As the remains of Emmanuel Ishola Durojaiye a.k.a. Alasari were laid to rest on Wednesday, 23 March, P.M.Entertainment can reveal that Durojaiye was stiil undergoing treatment at a private hospital before the accident that claimed his life occurred.

It was further gathered that the popular actor, who was being treated by a physiotherapist, acquired the Nissan Armada car that he travelled in about two months ago.

Unknown to some of his friends and associates, Alasari, who was living in his Ita Elega, Abeokuta home with only one wife, had three others and one of them is nursing a two-month old baby.

The late Durojaiye, who became popular with his role in Iroko Oluwere, was also running a popular programme on Ogun State-owned Gateway Television.

The programme, according to P.M.Entertainment source, is entitled Ida Ofin and it borders on human rights abuse, among other ethical issues.

Apart from these revelations, he was also said to be planning the release of two movies, Iyanu (Part 2) and Omo Night Club.

P.M.Entertainment also gathered that the late Alasari had a series of stories which he was planning to put into movies as the television programme afforded him opportunity of getting stories from various sources.

The burial of Alasari, who died at the age of 49, attracted thousands of people, including students, colleagues in the movie industry, friends and fans. One of the prominent people at the burial is the Action Congress of Nigeria, ACN, governorship candidate in Ogun State, Senator Ibikunle Amosun.

As soon as the hearse conveying his body was spotted, residents, students and other sympathisers trooped to the streets to catch a glimpse of the casket conveying the remains of their idol to his final resting place.

The casket, however, was not opened, as against the request of the officiating minister, because the crowd was surging forward to catch a glimpse of the body. So, that aspect of the programme was cancelled to avoid pandemonium.