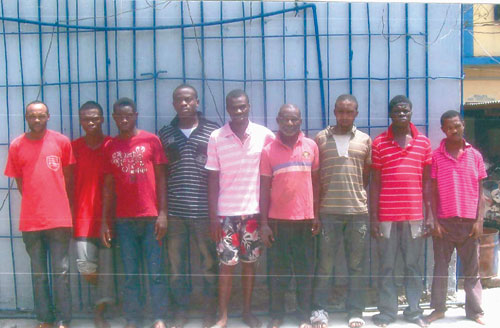 Nine suspected armed robbers who specialised in snatching exotic cars have been arrested by the police in Lagos, South-West Nigeria.

P.M.NEWS investigation revealed that four of them recently snatched a KIA Rio car from a woman who left her church at about 11p.m at Yaba, Lagos. They later drove it to Ajah used it to Intercept a new Prado SUV. But unknown to them, the police at Ajah Division had earlier received a radio message about the stolen car.

The police chased them.And in attempt to get the robbers arrested, three escaped while the driver was apprehended.

He led the police detectives attached to the State CID, Panti, Yaba, to their hideout at Ebute Oyingbo, where other suspects were arrested.

Their leader, Otochukwu Ezeh, in his confessional statement to the police said: â€œWe sell fairly used clothes at Yaba market to deceive people but at night we go out to snatch cars. We have been doing it for one and a half years. We live in plank houses so that people would notÂ  suspect us.

â€œWe specialise in snatching neat good cars which we drive to Agbara, Ogun State to a man who links us with the buyer, an Alhaji from Cotonou, Benin Republic.

â€œOur target in a week is usually to get eights cars.â€

Their armourer, Chima Fidelis,Â  a 62-year old grandpa said: â€œI keep their guns for them and I get N50,000 at the end of each operation.

â€œI accepted to keep guns for them because my children refused to take proper care of me.â€

Meanwhile, the police at the State CID, Panti, Yaba are on the trail of the stolen cars they sold in Agbara and the buyer in Cotonou, while the suspects have been charged to Ebute Metta Magistrateâ€™s Court in Lagos.

The suspects were ordered to be remanded in prison custody at Apapa, Lagos.