Siasia Gets Arsenal's Aneke For Nigeria 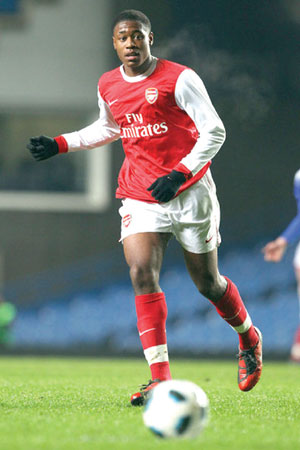 Coach Samson Siasia is making good his determination to bring on board most of Nigerian-born footballers playing in top leagues across the world.

One of such trips abroad paid off with securing the commitment of Arsenal youngster, Chuks Aneke, who said that he is ready to commit his international future to Nigeria after meeting with the Super Eaglesâ€™ handler, Siasia.

Reports say Aneke, along with his parents met Eaglesâ€™ Siasia in London last week and after a long discussion and assurances, he gave his word that he would turn up for the country despite having represented England at the Under 17 level.

“They came to meet me at my hotel and we discussed,” Siasia told journalists in London. “He was worried about some stories he had heard about the treatment of players in Nigeria. But I assured him that things were changing; the new federation is taking players’ welfare seriously and the whole set up is being run professionally.

“After that, he assured me that he would play for Nigeria, and I must say we are happy to get such an incredible talent.”

Aneke, 18, is a product of the Arsenal youth system, where he has been since he was 8 years old.

He is one of the most highly rated players in the Arsenal Reserve team, with manager Arsene Wenger comparing his technical skills to club captain Cesc Fabregas. Aneke was also courted by Barcelona, and was almost poached by the Catalans before he signed a professional contract with the Gunners when he turned 17 last year.

An incisive, intelligent ball-playing midfielder, Aneke made his breakthrough into the reserve team last season and put in some solid midfield performances while continuing to impress in the Under-18s. He also chipped in with some important goals, such as his two headers in the FA Youth Cup Third Round clash with Crewe Alexandra.