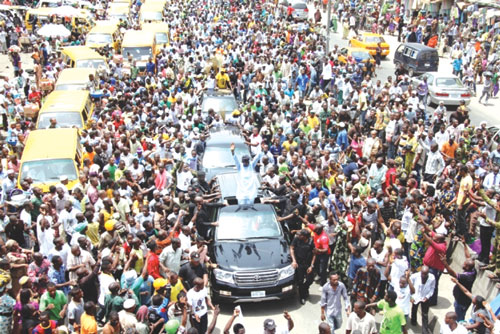 The Governor Babatunde Fashola-led Lagos State Government on Tuesday debunked allegations being peddled by opposition political parties that it plans to introduce some anti-people policies in the state. The allegations were described as baseless and a calculated attempt to deceive the people of Lagos State for whom such parties have no concrete plans.

The government, in a press statement, said the opposition had recently embarked on rumours aimed at poisoning the peoplesâ€™ minds against the administration of Mr. Babatunde Fashola warning that such rumours should be seen as the handiwork of mischief makers.

The rumours aimed at blackmailing the people, the government said, included, that Fashola still plansd to ban commercial motorcycle operators (okada riders) from Lagos roads, to demolish houses in many parts of the State and to increase tax on food items and cows brought into Lagos.

Other vile rumours are: the government will close down markets, small scale hotels and impose heavy tax on beer parlour operators as well as increase the prices of lock-up shops.

Describing the rumours as false and unfounded, the government said it would be fallacious for an administration which in the last four years had, through its people-oriented programmes, created thousands of jobs for unemployed youths in the state to embark on programmes that could create unemployment.

Recalling the steps taken by the present administration to regulate okada operations in the state, the government said all it did was to provide safety measures and procedures in the operation of commercial motorcycles to safeguard their operators and passengers.

The government maintained that out of concern for the livelihood and safety of commercial motorcycle riders in the state, the present administration did not ban the operation but only restricted them to some roads and issued them with crash helmets and other safety gadgets.

â€œUnlike the PDP-controlled governments in Abuja and Port Harcourt, we did not ban okada operation in Lagos. Our major concern was the safety and livelihood of the operators. That is why we gave them crash helmets,â€ the government said promising to issue more safety gadgets to the operators.

On the alleged plan to close down markets, the government said it could not be true of a government which, in the last four years, has rehabilitated many traditional markets in the state and embarked on the construction of new ones to provide better commercial and business spaces for the people across the state.

Warning Lagosians to beware of the evil machinations of the opposition, especially the Peoples Democratic Party, the government described the blackmail strategy as the last desperate act of a sinking party, pointing out that the opposition has been so overwhelmed by the undeniable transformation that has taken place in Lagos in the last four years that it has no other means of getting the attention of Lagosians than to engage in lies and falsehood.

Also, in a release in Lagos, signed by the Lagos State Publicity Secretary of the ACN, Joe Igbokwe, the party said that desperate political profiteers in PDP have been going all over Lagos, spreading reckless and unsubstantiated rumours so as to confuse Lagosians and cart away their votes for the purpose of wrecking Lagos.

The party warned Lagosians to beware of such people and parties as they will never wish Lagos anything good but are after their pockets.

â€œIn recent times, we have been inundated with enquiries over rumours that some selfish politicians in the PDP, who have nothing better to promise Lagosians, are going round spreading wild and reckless rumours that are aimed at pitting the good people of Lagos against the super performing ACN government in Lagos.

â€œLagos ACN has been firm and unwavering in responding to these wicked and self serving rumours that emanate from the wretched but desperate camps of the PDP with a firm rebuttal that these were the fruits of the idle and bare minds of frustrated political mercantilists who do not want the good works going on in Lagos to continue because of their desire to feed from the treasury of Lagos.

â€œLagos ACN calls on all Lagosians to disregard these wicked rumours that the PDP is bandying, after losing the confidence of Lagosians who are irrevocably committed to voting for Governor Fashola and the ACN to continue the wonderful transformation Lagos has been experiencing in the past twelve years. We want all Lagosians to treat these rumours as mere wares of frustrated selfish political profiteers who desire and long for Lagos merely to add to their selfish pillaging of the resources of the country.â€

The governor, perhaps, wanted to test his might ahead of the 26 April Governorship election and see what the people think and feel about him and the people came out in their thousands.

A very enthusiastic crowd of appreciative residents of Lagos trooped out in large numbers to acknowledge and cheer the governor as he embarked on a road walk campaign from his Marina official residence to his Alausa office.

Fashola drove in an open roof jeep in a motorcade and waved to excited Lagos residents who lined up the routes from Marina through Tinubu Square to Eko Bridge, passing through Iddo and Otto and down to Oyingbo, Adekunle, Alagomeji, Ikorodu road to Alausa.

The governor was with his running mate, Mrs. Victoria Orelope-Adefulire. The road walk took off around 12.30 p.m. from Marina.

At Tinubu Square in Broad Street, an astounding number of bank executives, corporate staff members, and traders instinctively abandoned their work schedule to catch a glimpse of Fashola and his running mate while those who could not come from the high-rise offices were seen peeping from the windows to watch the road show.

From the open-roof sport utility vehicle, both Fashola and his running mate were busy waving brooms to their supporters, who were flooding the streets of the metropolis from different corners, chanting â€œBRF for second termâ€ and expressing their support for continuity through praise singing and open appreciation.

Speaking, Fashola said, â€œthis is our territory; we are canvassing and energizing our people. We are canvassing for votes. This is a democracy. It is a peopleâ€™s government. We are galvanizing all the support that is unequivocally behind us.â€

He explained that in a weekâ€™s time, the administration would overcome all its adversaries and record overwhelming success at the polls once the signature which was the vote of the people for the ACN was appended.

Fashola urged the people to come out en-masse on Tuesday â€œto sign on to the continuity of a transformation that has started in Lagos State, adding that the last 12 years had been that of tremendous success of good governance in Lagos State.

â€œWe want the people to sign on to the continuity of the BRT system, light rail, water supply, good security, free education, better opportunities, Agric Yes programme and all life changing programmes which must continue,â€ he said.