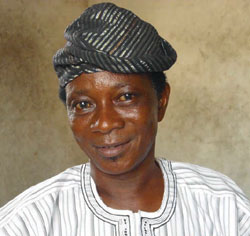 He died at his residence in Bariga yesterday after a brief illness at the age of 53.

He followed the group to Ibadan, where he had a short stint as a broadcaster under the tutelage of the late ace broadcaster, Goke Akinlabi.

He later relocated to Lagos, where he established his own group known as Tunde Ola and his African Wonder with the introduction of acrobatic displays as side attraction at events. It was during one of his spectacular performances that King Sunny Ade gave him the nickname Abigbeyin Eledumare.

Famed for eating broken bottles and naked fire at events, Abigbeyin Eledumare started a career in radio presentation at the defunct Radio Nigeria, Ikoyi, Lagos between 1981 and 1984 before moving to to Radio Lagos, where he presented Kâ€™a sun lâ€™ayo, a late night programme alongside Alhaji Bashiru Adisa a.k.a. Baba Gboin and Ile Nko? every Saturday night for many years as well as had own independent programme, Aye Gbâ€™ege, for a brief period.

Tunde Ola had four albums entitled Faaji Series to his credit even though his dream to release another album before the end of this year, was unfulfilled.

He is survived by a wife and children.