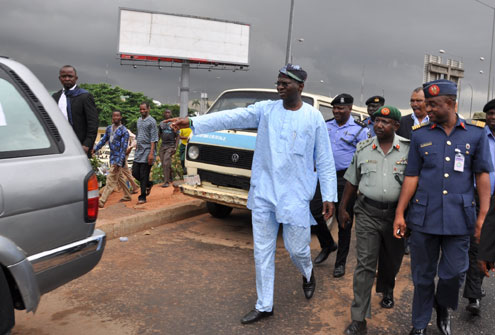 Lagos State Governor, Mr. Babatunde Fashola SAN (left), pointing at one of the vehicles illegally displayed on the road for sale during his visitation to the Airport Road, Ikeja, along with other military service commanders on Thursday, June 9, 2011. With him are: Commander 9 Brigade Ikeja, Brigadier General Sanusi Nasiru Muazu (middle) and Airforce Commander 435 BSG Ikeja, Group Captain Ayo Saad Abdulsalam (right).

Lagos State Governor, Mr. Babatunde Fashola (SAN), Thursday re-emphasized the need for law and order in the society just as he paid an unscheduled visit to the local Murtala Mohamed Airport Road along with service commanders in the State to intervene decisively in the traffic build-up on the road.

Worried by the rapid conversion of part of the two lane road, which clears vehicles from the local Airport into Agege Motor Road towards Oshodi, into an illegal bus park and garage for the sale of cars by some squatters thereby causing traffic build-up on the road, the Governor, in company with the service chiefs of the military agencies in the State, met with transport operators in the area cautioning them to stop the practice and free up traffic or risk enforcement by the State.

Fielding questions from newsmen after the visit during which he spoke with the operators, Governor Fashola explained that the visit was to meet and dialogue with those who carry out illegal activities and cause traffic hold-up on the road in order to find a solution to the problem.

Governor Fashola further explained that people come to the nearby mammy market to trade, park their cars on the road while some car dealers also put their cars there for sale noting that all these have resulted in reducing the two-lane road into one lane.

â€œWe see that traffic is building up along this axis again; right from the International Airport Road, people spend time unnecessarily here and some of the problem is identified with the parking here; people who come to trade here, people who park here and people who put vehicles here on sale, all have taken up one lane. You find that the two lanes which come from the Airport have been reduced to one laneâ€, the Governor said.

Governor Fashola, who described the situation as unfair to the people, declared, â€œThere have been accusations and counter accusations as to who is responsible for the traffic building here. Some say it is the Police, others say it is the Air-Force, but we have now found out that the problem is from FAAN and a few other people here of military relationshipâ€.

â€œSo we have brought the leaders here to come and meet with them and they have agreed today, before enforcement, to voluntarily correct the situationâ€, the Governor said adding, â€œI think it was better to come and engage with citizens first before we start enforcement so that they know why we are doing thisâ€, he said.

Acknowledging that everybody has a right to his or her freedom; to do business and to trade, Governor Fashola, however, declared, â€œYou cannot do business at the expense of others. Our democracy is government of the people and working for the people, so let us work together and correct these simple things so that life will be better for usâ€.

Commending the relevant security agencies and their Service Chiefs for cooperating with his administration to find lasting solution to the problem, Governor Fashola further declared, â€œI have said it that Law and Order is the most important thing that will take us to where we are goingâ€.