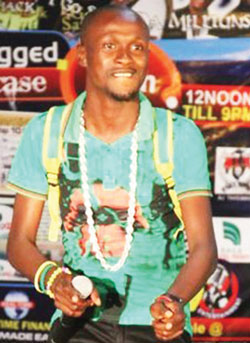 Meshack, one of the rising artistes on 911 Records label has concluded plans to extend his activities to Lagos, the centre of entertainment.

Showbiz Trends learnt that this decision is to promote his Dream Come True album and to further enhance his music career. It would also enable him take advantage of the relationship between the Warri, Delta State based artisteâ€™s management and Now Muzik Management.

His debut album is a 16-tracker produced by Jay Sleek and B Jay with lead track â€˜Tambourine Girl.

Other tracks in the album include Feeling Inside and I like dat Booty. Young and talented and with a voice that could be mistaken for that of his mentor, 2face Idibia, Meshack sees music as spiritual and said he is moving to Lagos to build a brand and step up his game.

He was one of the rising stars that enlivened the Now Muzik organised by Touch of Genius: 2face Idibia Tribute held 28 May at Scintilla, Lekki, Lagos.