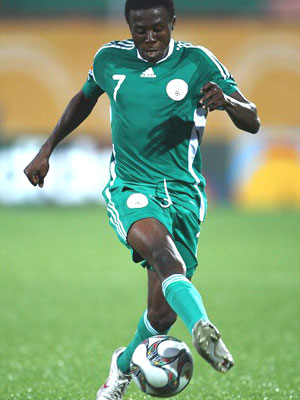 Former Nigerian junior international, King Moses Osanga King, has warned the countryâ€™s U-23 Eagles to beware of Ghanaian team in the second leg of the All Africa Games qualifier in Kumasi on Sunday.

The former Nigerian junior international warned Coach Austin Egauvoen and his team not to expect what Ghanaâ€™s Black Meteors played in the first leg of the qualifier in Benin Edo State, as the ir hosts would be coming out smoking against the Nigerian team.

According to Osanga, who played at the 2009 FIFA U-20 World Cup in Egypt, â€œthe Ghanaâ€™s team would be fully balance and re-engineered for the second leg tie. I believe they would have regained their composure after the defeat in Benin. So Eguavoen and his team should watch out and not be complacent in the match, otherwise Ghana will write off the result of the Benin match.

Meanwhile, U-23 Eaglesâ€™ handler, Austin Eguavoen, has challenged his charges to stay focus ahead of Sundayâ€™s 2011 All Africa Games qualifier against the Black Meteors of Ghana in Kumasi.

Eguavoen who has remained unruffled following the seeming non-availability of some key players has maintained that any Nigerian team can hold their own against any African side if they are determined and focused regardless of the players paraded.

â€œWe have started this qualifying series on a great note and we are going to end it in style. I have observed that our national teams always lose concentration whenever they have good results, but that would not be our story. We must remain focused and finish this task in style,â€ Eguavoen said.

He said there is no room for complacency as victory remains the ultimate target in Kumasi. â€œIt does not matter where they are taking us to play; victory for us is the ultimate target and now is the time for us to show the winning spirit. This is the week all our efforts since the beginning of this season would be put to test,â€ he said.

Nigeria take a 3-1 first leg advantage to Kumasi in a winner takes all encounter for the 10th All Africa games in Maputo, Mozambique, in September.

Ghana denied Nigeriaâ€™s male team an appearance in the last All Africa games. SuperSport.com learnt from the teamâ€™s media officer, Arafat Aliu that the Warri Wolves and Super Eaglesâ€™ striker, Ekhigo Ehiosun has stormed the Dream Team V camp on Monday after helping his club beat Bukola Babes 1-0 in the Nigeria Premier League game at the weekend. The Ghana Nigeria game holds on Sunday, 10 July at the Baba Yara sports Stadium, Kumasi.