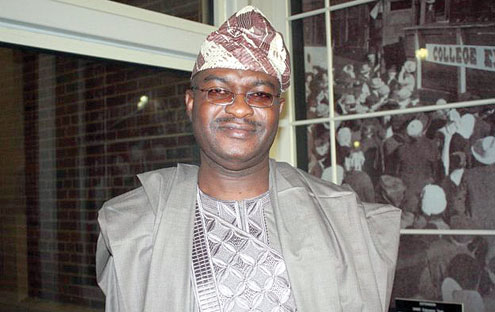 He was brutally murdered by a gang of robbers at about 3a.m.on Monday morning, 4,July.

P.M.NEWS gathered that about five masked armed robbers stormed the home of the popular auto dealer at 4 Siyabola Close, Adeniyi Jones, Ikeja, and butchered him.

The gang was reported to have gained entry into the well-secured home of the socialite through a canal bordering Alausa axis which has been closed for long.

The assailants reportedly deceived Jabitaâ€™s security guard by speaking Hausa language to him. This must have prompted him to open the gate for them early in the morning.

According to a family source, the robbers, after entering the house, tied the guard and found their way into the living room through the iron protector at the balcony.

P.M.NEWS gathered that the robbers met the deceasedâ€™s younger brother, Tunji, and forced him to take them to the deceased wifeâ€™s room. Two of the robbers went to the room and collected jewellery, cash and other valuables.

It was reported that when Jabita heard noises from his pent house, he came down to find out the cause of the commotion where he met the robbers who ordered him to lie face down.

Sources claimed that the assailants had hardly stepped out of the living room with their loot, when Jabita began to shout for help.

In annoyance, the robbers came back and stabbed him with knives and daggers.

The assailants, reportedly, dragged Jabita downstairs and left him at the balcony.

A family source informed P.M.NEWS that the late auto dealer would have survived the attack if the hospital he was rushed to had promptly attended to him.

It was gathered that the hospital demanded for N2 million before they could treat him. After much pleas, the hospital agreed to collect N700,000.

The hospital was reported to have commenced treatment after Jabitaâ€™s family left to get the money. It was while the doctors were fixing dripon the popular businessman that he died, having lost so much blood.

Narrating his experience to P.M.NEWS ,Tunji said: â€œWe begged the nurses but they insisted they would collect N700,000 before they start treatment. It was when we left for the money that they started giving him treatment. If they had attended to him earlier, before requesting for money, my brother would have survived. He bled to death.â€

Jabitaâ€™s remains were later interred at the Ikoyi Vaults and Gardens, on Monday afternoon, according to Islamic rites.

Born on 16 May, 1962, the late Jabita ran a chain of auto marts, which has its head office in Alausa, Ikeja, Lagos State.

His family and friends described him as a great philanthropist and humane person.

Meanwhile, P.M.NEWS gathered that the police arrested Jabitaâ€™s security guard immediately after the incident because of his inability to give accurate account of how the assailants gained entrance to the well-secured home of the auto dealer.