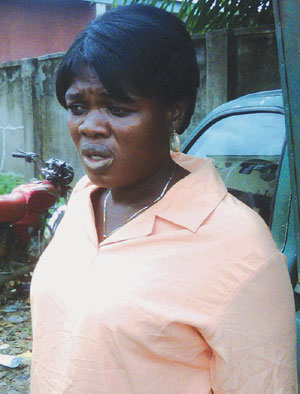 A battered housewife Mrs Harriet Obiageri Ariwoyo has dragged her husband, Prince Ariwoyo to a Lagos court where he was remanded at Kirikiri, Prison Apapa Lagos state southwest Nigeria for allegedly threatening to kill his wife.

Prince, 45, was arrested by the police at Igando station after he allegedly battered Harriet and threatened to kill her.

The incident happened at Apata street Akesan, outskirt of Lagos.

P.M.NEWS gathered that the mother of five daughters has been a victim of domestic violence known to their neigbours.

Her husband allegedly turned her into a punching bag at any slightest provocation.

P.M.NEWS learnt that the 18- year old peaceful marriage suddenly became sour after Harriet told Prince that she has had enough of child bearing since God has blessed them with daughters. Although Prince pretended to agree with her decision, he alleged turned into violent later and vent his anger on Harriet.

On the day the incident happened, Prince was alleged to have beaten Harriet mercilessly and injured her.

She went to Igando Police Station and reported the assault. When Prince was invited to the station, he threatened that he will kill Harriet in the presence of the police officers.

He was charged to Ejigbo magistratâ€™s court for threatening to kill his wife.

When the matter came up at the court, he pleaded not guilty to the charge.

The presiding magistrate, Mrs Sherry O. Solebo granted him bail in the sum of N500,000 with two sureties in like sum.

He was, however, remanded in Kirikiri prison, Apapa, Lagos because none of his relations came to bail him.