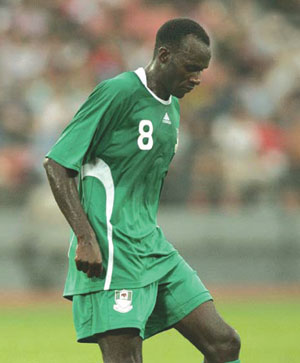 â€¢Sani Kaita in action for Nigeria during the last 2010 FIFA World Cup in South Africa.

Nigeria international, Sani Kaita, has expressed his wish to return to the Super Eagles in the countryâ€™s future engagements.

The out of favour Kaita lost his place in the senior national team due to his inglorious action in a FIFA World Cup match with Greekâ€™s national team in South Africa last year.

He was sent off in a match against Greece on 17 June 2010 in Nigeriaâ€™s second 2010 FIFA World Cup match for kicking Vasilis Torosidis when the Geek player motioned as if to throw the ball at Kaita.

This made him the first Nigerian player to be sent off inthe the World Cup. Greece went on to score their first goal and win their first match against Nigeria in the World Cup.Kaita was inundated with death threats within and outside Nigeria.

Since the World Cup, Eaglesâ€™ coaches from the time of Austin Eguavoen who took over from Lars Lagerback and Samson Siasia have been snubbing Kaita, who caught the eye of Sparta when playing for Nigeria at the 2005 FIFA U-20 World Cup in the Netherlands.

However, the former kano Pillarâ€™s midfielder has expressed his wish to don the green and white colours of the national team once again.

â€œI am looking forward to be back in the team,â€ declared Kaita, the ex- AS Monaco FC star, who left Frenchâ€™s Ligue 1 club on 13 January, 2009 to join FC Kuban Krasnodar on loan.

Meanwhile, the assistant coach of the Super Eagles, Simon Kalika, has said that Kaita can will return to the team if he is still in great shape.

â€œIf Kaita can prove himself to be in good form he can get a recall to the Eagles. All he needs to do is to be in good shape and play regularly for his club,â€ said Siasiaâ€™s assistant.