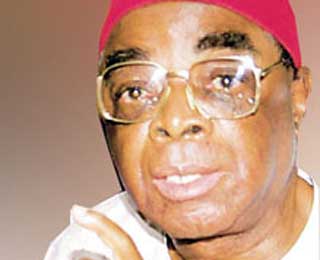 Immediate past National Chairman of the All Nigerian Peoples Party, ANPP, Chief Edwin Ume-Ezeoke is dead.

P.M.NEWS authoritatively gathered that Ume-Ezeoke died in an Indian hospital where he was taken for treatment. It was not clear, however, the nature of the ailment that led to his death. A close associate of the late politician told P.M.NEWS that he has been ill for some time, though not bed-ridden.

Eminent Nigerians and political associates have continued to pay tributes to the departed Second Republic politician as news of his demise spread across the country.

Second Republic Political Adviser, Alhaji Tanko Yakassai described Ume-Ezeokeâ€™s death as a huge loss to the country, just as he reminisced on how they met in 1979 when the deceased was elected Speaker of House of Representatives.

â€œWe worked together for four years as a result of which we became close friends and associates. He was a dedicated Nigerian, highly detribalized and committed patriot who discharged his responsibility as Speaker to the admiration of his colleagues and the five registered political parties at that time.

â€œWe maintained cordial relationship ever since; and because of that commitment and humility, we were close friends until his death. We also pray that Allah may grant him eternal rest and the family and the Nigerian nation the fortitude to bear this irreparable loss.â€

â€œHe was the first Speaker of the House of Representatives under the NPN/NPP accord in the second Republic. I was then the national Financial Secretary of the NPN. But I got to know him better when I became the NRC presidential candidate, and he served well as a member of the Finance Committee in the South-East. We became even closer when he decamped to ANPP and later became its National Chairman.â€

According to Tofa, Ume-Ezeoke was a faithful Christian who dedicated most part of his life to serve God, humanity and the country, just as he prayed that God may have mercy upon his soul and grant the family the fortitude to bear the irreparable loss.

The late Ume-Ezeoke was speaker of the House of Representatives in the 1979 government following an accord between the defunct National Party of Nigeria, NPN, which controlled the Federal Government and his party, the Nigeria Peoples Party, NPP.

While serving as ANPP National Chairman, Ume-Ezeoke led his party to succumb to the late President Umar Musa Yarâ€™Aduaâ€™s Government of National Unity, GNU. He is also fingered as one of the brains behind the President Goodluck Jonathanâ€™s proposed single-term of six years.