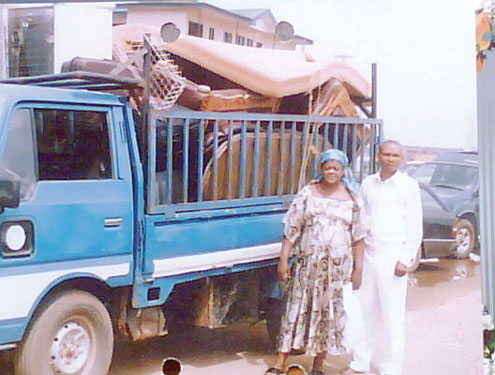 â€¢Prophetess Ngozi and her husband Pastor Ifeanyi with the widowâ€™s property.

The General Overseer of Godâ€™s Covenant Ministry, Ejigbo, Lagos, Southwest Nigeria , Ifeanyi Okoli and his wife, Prophetess Ngozi Okoli, have been arraigned before an Ejigbo Magistrateâ€™s Court, Lagos for allegedly obtaining a widowâ€™s property under false pretence and charged with stealing.

They are now at Kirikiri Prisons in Apapa, Lagos State.

Pastor Ifeanyi, 43, and his wife, Ngozi, 43, were alleged to have duped a widow, Theresa Onuora of all her properties worth N4 million under false pretence.

The widow and mother of three had gone to the church at 3, Brethren Street, Ejigbo, Lagos to seek help from God but allegedly ended up being duped by the pastors of the church through false prophecy.

Theresa told the police that Godwin Mba who is now at large took her to the church for prayers.

She added that Ngozi, who is the church prophetess, told her that she needed serious deliverance. Ngozi gave her a substance to bathe with and thereafter, rubbed it on her body for seven days.

She said after using it as directed by Ngozi, she lost her senses and whatever they asked her to do, she obeyed without questioning.

Theresa said Ngozi started prophesying to her that her late husband who died 15 years ago belonged to a secret cult and that all the wealth he acquired was through occultic means. The pastor and his wife reportedly told her that she cannot use the properties any longer, otherwise she and her three children would die.

They ordered her to bring all the properties to the church because it was their inheritance as servants of God, Theresa said.

The fear of losing her life and her children made her to carry everything in her house to the church.

The properties Theresa took to the church were a Mercedes Benz car with registration number NG 179AAA, furniture, refrigerators, TV sets, foam, ten boxes containing all her clothes and her childrenâ€™s shoes.

Others include: Rug carpets, fans, plates, kitchen utensils, brooms and every item she had in the three-bedroom flat.

After carrying all household items to the church, she and her children started sleeping on the bare floor of their house.

Pastor Ifeanyi started driving the car while Ngozi was wearing her cloths, shoes and jewellery. She was left with nothing, Theresa disclosed.

The matter was exposed when they prophesied to her again that they had a revelation that her late husbandâ€™s property still remained.

She told them that it was only an empty land her husband bought in the east.

They ordered her to go and sell it and pay the money to Ifeanyiâ€™s account. She went and sold it for N2 million and wanted to pay it as directed.

At this point she regained her senses and did not pay the money. And Ifeanyi started threatening her.

She opened up and told her friend what had been happening to her.

She was persuaded to report the matter to Ejigbo police station. Ifeanyi and Ngozi were arrested and later released on bail before they went into hiding.

They were arrested yesterday and charged to court for stealing and fraud under sections 390 and 419 of the criminal code 2003.

When the charge was read to them, Ifeanyi and Ngozi pleaded not guilty.

The presiding magistrate, Mrs. M. B. Folami, granted them bail in the sum of N500,000 with two sureties in like sum.

The matter has been adjourned till 14 September 2011 for mention. But the couple will remain in Kirikiri Prisons pending when they will perfect their bail conditions.