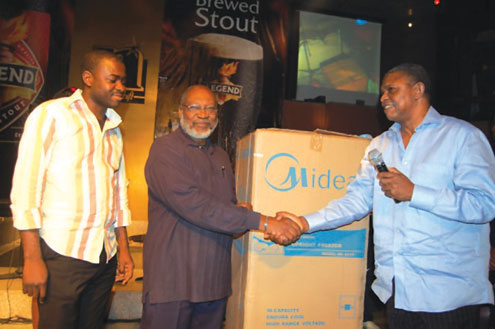 Celebrities from all walks of life stormed the Opebi, Lagos-based Niteshift Coliseum recently to witness the fifth edition of the monthly Legend Nite, an initiative of the Nigerian Breweries Plc, to appreciate and encourage its loyal customers.

It was a night of fun, as celebrities and guests stormed the clubâ€™s dance floor, having been entertained by the Shifters Band and the scintillating music-mix from the clubâ€™s DJ, with comic relief from the MC, D.Don.

Speaking at the event, Edem Vindah, Media and Public Affairs Manager, NB Plc, said â€œLegend Extra Stout is using this as a platform to reward and appreciate our numerous consumers and celebrate real men and ladies, while at the same time, we are giving consumers the opportunity to have the free taste of the brand.â€

Celebrities who witnessed the event included ace television personality, Bisi Olatilo; popular sports analyst and TV presenter, Mitchell Obi; veteran actor, Taiwo Obileye; Mr. Niyi Akinsiju, celebrity pilot, Captain Chris Najomo, who also won a prize from Legend and Mr. Sule Abiola, younger brother of the late business mogul and political martyr, Chief Moshood Kashimawo Abiola. There were quite a handful of foreign nationals some of who were tourists, expatriates and a host of other showbiz personalities. Ageless and bearded actor, Obileye, was more than surprised when his name was picked in the lucky dip as the winner of the star prize for the night. He went home with a high tech Midea deep freezer, while Anselm Onyieuke, a Nollywood actor, came second, winning a 25KVA electricity generating set.