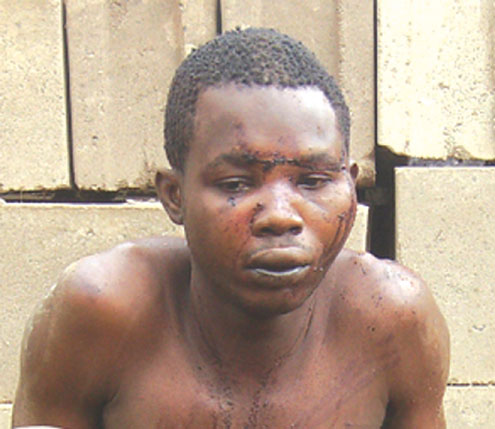 The police in Lagos, Southwest Nigeria this morning rescued two suspected robbers from mob attack at Iju-Ishaga area of the state.

News of the visit of the robbers soon spread like a wildfire, prompting some youths to mobilise residents to challenge them.

According to our sources, one of the robbers, on sensing danger reportedly scaled the fence and escaped, while his comrade-in-crime, identified by the police as Fatai Oyeniyi was beaten to a pulp by the angry mob.

But for the timely intervention of the police, Oyeniyi, who was arrested with stolen jewellery, handsets, cash and other valuable items, was rescued and whisked away to Iju Ishaga Police Station, Red House, where he is being detained.

When P.M.NEWS visited the station, Oyeniyi confessed that it was the devil that lured him to the house, which he described as his first attempt.

He promised to turn a new leaf, if left off the hook by the police.

Contacted on phone, Samuel Jinadu, Lagos State Police spokesman confirmed the story, adding that investigation has begun on the incident.