'I Killed Him Because He Threatened My Life' 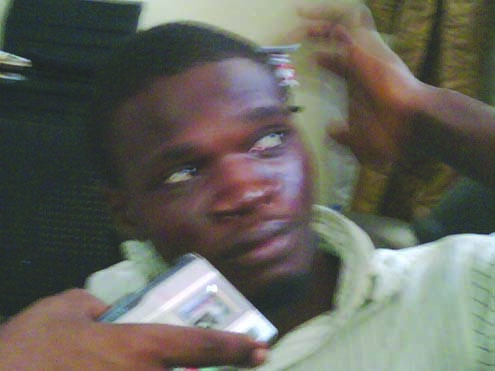 Chinedu John Ogbonna who allegedly killed his colleague, Emeka Odoh, in the early hours of yesterday at 30, Burma Road, Kano, has disclosed that he does not regret killing Odoh.

â€œHe threatened my life with words; that was why I did what I did,â€ Ogbonna told the police during interrogation this morning.

According to a police source, Ogbonna has not shown any remorse and by his disposition, the killing was a conscious act.

Mrs. Caroline, owner of the local eatery where the incident occurred told P.M.NEWS that she was bewildered over the incident.

â€œI have never, in any way, noticed the two of them quarrelling. I donâ€™t know what came over that boy, Chinedu. If he claimed Emeka was looking for his trouble, he never complained to me.

The police image maker told P.M.NEWS that investigation is still ongoing after which the suspected killer will be charged to court.

In the early hours of yesterday, residents of 30, Burma Road, Kano, woke up to find the body of Emeka Odoh in a pool of blood inside the restaurant of Mrs. Caroline, popularly known as Nwayioba.

Beside the deceasedâ€™s body was a digger stained with blood. The head of Emeka had been broken.

Chinedu was believed to have attacked Emeka while the deceased was asleep. The duo, who are both from Enugu State, southeast Nigeria, worked as attendants at the local eatery.

Speaking with P.M.NEWS, the suspected killer said: â€œI carried the digger and hit him on the head and I stood there until he died. My intention was to kill him and now that he is dead, I have rest of mind. I killed him at about 12.30am and I opened the gate and left the compound. I am satisfied that Emeka is dead and I have no regrets.â€

According to one of their colleagues, the digger does not belong to the restaurant. Chinedu and Emeka had been sleeping in the restaurant after each dayâ€™s business.

Tags:   Chinedu John Ogbonna   Emeka Odo   I Killed Him Because He Threatened My Life   Ppro