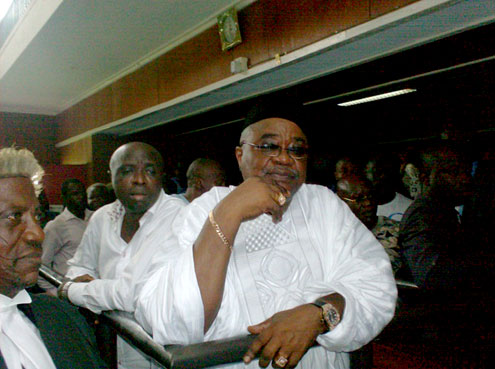 Adebayo Alao-Akala in court this morning.

An Oyo High Court has ordered the former Governor of Oyo State, Adebayo Alao-Akala to be remanded at the custody of Oyo State Security Service (SSS) along with Senator Hosea Agbola and his business partner, Olufemi Ademola Babalola, the owner of Jogor Event Centre.

Justice Mashud Akintunde Akinfemi Abass said the trio should be remanded till tomoorow when their bail application would be heard.

According to him, â€œI am not unmindful of the fact that the lead counsel to the prosecution has a serious case in Lagos tomorrow. But the case we are talking about is equally important as the one this court is entertaining. I am conceding to 24 hours, meaning that the bail argument would be adjourned till tomorrowâ€.

Earlier, Alao-Akala, Senator Agbola and Babalola were arraigned before the court by the EFCC on an 11-count charge.

According to the charge sheet number 1/5EFCC/2011, Alao-Akala, Senator Agboola conspired to award contract without budgetary provision, contrary to section 26 (1) (C) and punishable under section 22 (4) of the corrupt practices and other related offences Act 2000.

It reads, â€œâ€¦Alao-Akala, whilst being the governor of Oyo State, Senator Agbooola whilst being the commissioner for Local Government and Chieftaincy Matters and Babalola whilst trading under the name and style of Pentagon Engineering Services between 2007-2009, conspired amongst yourselves to award contract without budget provision for the sum of N,500,000:00 for the construction of roads in the 33 LGs of Oyo State.

The charge said the trio conspired to obtain by false pretence the net sum of N269, 156, 250:00 from the state local government joint account.

Alao-Akala was accused of engaging in the acquisition of a property known as Ile-Itesiwaju located at 32 Oba Adebimpe Road Old Gbagi Ibadan Oyo State knowing that the money used in acquiring the said property was derived from illegal act as well as acquiring property with money derived from illegal act contrary to section 18 (1) (A) and punishable under section 18 (2) of EFCC Act 2004.

Other counts are that Alao-Akala engaged in acquisition of a property located at Old Bodija off Rotimi Williams Street, Ibadan knowing that the money used in acquiring the said property was derived from illegal act, engaged in concealing the geninue nature of the ownership of property contrary to section 18 (1) (d) and punishable under section 18 (2) of EFCC Act 2004 and lastly that Alao-Akala concealed the geninue nature of the ownership of a property at 124 Gladstone Road, Merton SW 19 QW, London in the name of one Magdalene Mojisola Akala, which said property was derived from criminal Act.

Also, after taking the argument of both counsels, the court rose for about 40 minutes after which the judge delivered its ruling.