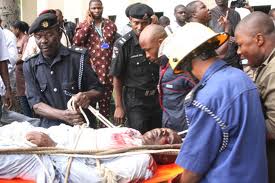 What a Xmas to remember!. Another bomb has gone off in Damaturu, the base of the Boko Haram insurgents, this time a suicide bomber hitting the convoy of the Joint Task Force trying to restore law and order in the state.

According to the Daily Trust online, the suicide bomb attack was executed against the head office of the State Security Services in Damaturu, Yobe state.

Daily Trust said: ”Witnesses say a suicide bomber acting on intelligence had trailed the Head of Operations of the Joint Task Force in Damaturu who wanted to take away some vital exhibits retrieved from some boko haram suspects.

”The JTF boss who was moving in a convoy of cars, entered the gate of the SSS headquarters, not more than 50 metres away from the perimeter fence of the Yobe state Government House. It was at this point that the suicide bomber driving in a car bulldozed his way through the gate and rammed his bomb-laden car into the last car in the convoy.

Many officers are feared to have been killed. There have been no official casualty figures yet.

Another attack was reported at Gadaka in Fika local government, some 200 metres away from Damaturu, the state capital yesterday night. Vehicles of worshipers attending a Christmas vigil were set ablaze while they were in the church. There were however no casualties.

Meanwhile, boko haram’s spokesman, Abul Qaqa has claimed responsibility for the series of attacks, according to the Daily Trust.

One of the policemen patrolling the Gangare\Murala Muhammed way Jos, has been confirmed dead following an attempt to blow up the Mountain of Fire and Miracles church in the area.

The attackers numbering about four were said to have taken the bush path from Rikkos which links the area the church was located to throw the explosive device.

They were spotted by the policeman whose name is yet to be disclosed and they threw the explosive device which landed quite close to the church premises and exploded without affecting anyone.

The policeman was said to have fired at the attackers and the replied him with several shots as they were said to be well armed.

One of the bullets was said to have caught the policeman and he died as he was being taken to the hospital.

One of the suspects was however apprehended with explosive devices and a pair of army boots.

He said the state government will leave no stone unturned to see that the perpetrators are brought to book.

Nigerian government plans to spend close to a trillion Naira on security in 2012, when it is clear that the present security apparatus has woefully failed to stem the wave of bombings and have been at best reactive, instead of being proactive.