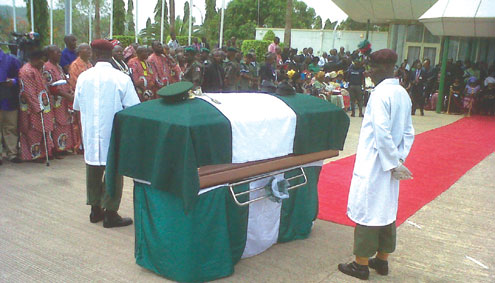 •Draped in Nigeria’s national colours, the casket bearing the remains of the late Chukwuemeka Odumegwu Ojukwu at the State House, Abuja, this morning. PHOTO: FEMI IPAYE.

The remains of Dim Ikemba Chukwuemeka Odumegwu Ojukwu were this morning received at the International Wing of the Nnamdi Azikiwe Airport in Abuja.

The body of the Biafran warlord arrived from London aboard a British Airline flight at about 4a.m.

While a huge crowd had gathered at the Hero’s Square in Owerri, Imo State, southeast Nigeria to receive the corpse of the warlord, a military parade and brief ceremony was held in honour of the departed hero at the Presidential Lounge of the Airport.

At the Abuja ceremony, it was in deed a harvest of tributes as notable Nigerians led by the Vice President, Architect Namadi Sambo, who represented President Goodluck Ebele Jonathan at the event, paid glowing tributes to the man who fought for equity, fair play and justice in Nigeria.

In the Presidential remarks read by the Vice President, President Jonathan said the late Ikemba Nnewi, Dim Chukwuemeka Odumegwu Ojukwu, lived an astute life in spite of his privileged upbringing.

He praised the bravery of the fallen hero who fought for equity and justice and stood for these virtues up till his death.

Others who paid tribute to Ojukwu include the Senate President, David Mark, who also chaired the Abuja event.

In his address, Ikimi noted that the life and times of the late Ojukwu will forever form a major milestone in the nation’s history and observed that his impact on the nation will continue to be debated.

On her part, the First Lady saluted the courage of the late Ojukwu whom she said was not just an icon, but the pride of our nation.

She noted that Ojukwu had left a large footprint in the sands of our time.

Today marks the first day, Ojukwu’s remains will touch ground on his native Igboland, for a tour of the five south-eastern states of Nigeria.

Starting with Imo State, the body will later be taken through Abia, Ebonyi, and Enugu, before it is interred in Ojukwu’s hometown, Nnewi, in Anambra State.

Thousands of citizens converged on the centre, very early to pay tributes to Ojukwu, while many other lined the streets of the state capital in celebration.

As at press time Ojukwu’s body was still being expected at the Owerri Airport where the state governor, Rochas Okorocha led a government delegation to receive the remains.

In a tribute, Governor Okorocha described the late Ojukwu as one who led a life that was defined by the values of sacrifice, honesty and persevearance.

“Nothing defined Dim Ojukwu’s life and its ideals more than his commitment to Justice and equity,” Okorocha said.

Different cultural groups also trooped to Hero’s Square to perform in honour of the man described passionately as the Igbo man’s hero.

Amid tight security, important guests and visitors to the venue were made to park their cars about 500 metres away from the venue.

Producers of souvenirs, almanac and other mementoes with the inscriptions on Ojukwu have been making brisk business.

P.M.NEWS learnt that most of the youths who were born after the civil war and only read or were told about the exploits of Ojukwu were passionate about him that they were ready to do anything to honour him.

Traders from all the nooks and crannies of Imo state closed their shops while the state government declared today as a public holiday.

Most of the youths who spoke with our correspondents said Ojukwu is more popular even in death.

They said his death has rekindled Igbo dreams of equality and fair play in Nigeria.

The security operatives made sure anyone entering the venue was thoroughly screened.

Anyone who disobeyed security operatives directive was made to frog jump.

The unprecedented crowd and important dignitaries including governors and others were still waiting for the corpse of Ojukwu as at press time.