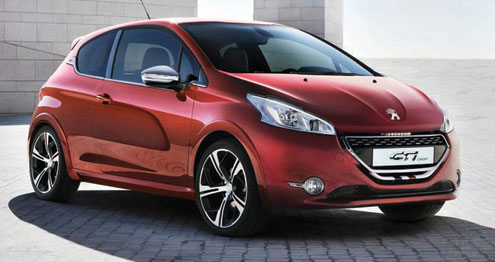 Peugeot is set to reveal how its next GTi incarnation will shape up when the 208 GTi Concept previews the next iteration of the type at the upcoming Geneva show.

The GTI Concept will be powered by a 200 PS 1.6 litre THP 200 engine, the same as found on the RCZ GT, and the mill will be combined with a six-speed manual gearbox. Some dimension changes coming in from the base 208 – the concept has a 36 mm wider track both at the front and rear to enhance the dynamic experience.

Elsewhere, the car gets a rear roof spoiler, and is equipped with all-round disc brakes, measuring in at 302 mm diameter at the front and 249 mm at the rear, replete with red-painted brake calipers.

Other items include double chromed exhaust tailpipes, aero lower bodywork spoilers and lower sill skirt extensions, and placed within the grille is a brushed aluminium GTi Concept logo that are also on the rear quarter panels – the mark is a salute to the car’s illustrious predecessor, the legendary 205 GTi.