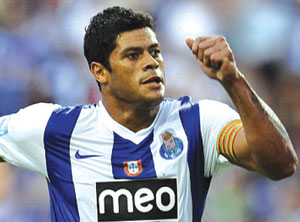 Chelsea have been told that they will have to pay £83million if they are to sign Porto striker Hulk this summer.

Chelsea manager Andre Villas-Boas earlier this week confirmed that he is keen on signing Hulk this summer.

But the Brazil international has a release clause set at €100million [£83m] and Porto president Pinto da Costa insists he will not let the 25-year-old leave the Estadio do Dragao for less. “I’ve said it before, we would not sell Hulk and therefore Chelsea must activate his contract,” he said.

Hulk is keen on a move to Stamford Bridge, according to his agent, and earlier this week, Villas-Boas confirmed to TSF: “We have [Salomon] Kalou and Florent Malouda, both of whom are nearing the end of their contracts, while Juan Mata and Daniel Sturridge are the future.

“As such, there will surely be a place to fill and I see room for an explosive player on the wing, someone who is strong in one-on-one situations and Hulk fits that profile.”

Villas-Boas was also asked about Porto defender Alvaro Pereira – who saw a move to Stamford Bridge blocked last summer – and midfielder Joao Moutinho, who has also been linked with a move to west London. “They could surely play in the Premier League and at Chelsea,” he said. Abramovich is likely to baulk at the asking price.