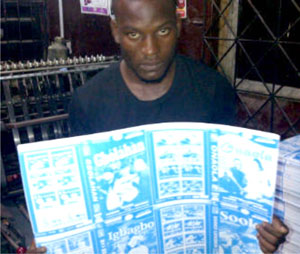 •One of the suspected pirates.

Nigerian entertainers under the auspices of a coalition tagged Entertainment Protection Initiative (EPI) have called on the Governor of Lagos State, Mr. Babatunde Raji Fashola to join in the fight against piracy which they described as a major bane of the entertainment industry.

Speaking with NollywoodReel over the weekend, the Organising Secretary of ANTP, Lagos Chapter, Prince Lambert Dike, reiterated that the fight with pirates will be to a standstill, even though the government has refused to take up the challenge.

According to him, Yoruba movies constitute 60 percent of the total films released in Nigeria, adding that the sector, apart from being the largest employer of labour, has also generated enviable revenue for the government.

He opined that considering their contribution the the economy, he sees no reason why government should not protect the industry from pirates who are milking it dry.

“Yoruba produce over 60 per cent of Nigerian movies, and it is our work that is being pirated most. In fact, our films are pirated less than 24 hours after their release, and the pirated works are being sold at ridiculous prices, mostly in four-in-one DVD formats.

“If we can be paying the National Film and Video Censors Board (NFVCB) up to N40,000 per movie, and the Copyright Commission collect about N6, 500 on each film too, if you multiply these monies, you will realize that the government makes millions of naira from us every month, so I see no reason why we should not be protected because we release 60 films each month,” Lambert lamented.

While calling on the Lagos State Governor to take up the challenge of fighting piracy to a standstill, Public Relations Officer of YOVIFPMAN, Prince Owoade Adekunle noted that “the truth of the matter is that 80 per cent of our movies are being sold in Lagos, so we want to call on the state governor to take up challenge first. Besides, we believe in the Lagos dream and that was why we took part actively in the election campaigns of the governor.

“We want the governor to give a pronouncement or close down Alaba Market where the piracy kingpins operate from. That will serve as a deterrent and make the fight easier for us because without the help of the government, the battle will be difficult.”

A board member of YOVIFPMAN, Gabriel Ekundayo disclosed that on Thursday, 29 March, the association and other entertainers will embark on a peaceful walk/rally to make their grievances known.

According to him, the protest which will involve all major players in the country’s entertainment industry, will witness presentations to the Presidency, Chief Justice, the National Assembly and other concerned government authorities.

In its continued bid to fight piracy, authorities of the Yoruba Video Films Producers/Marketers Association of Nigeria (YOVIFPMAN), had arrested a couple of movie pirates in some parts of Lagos including Alaba, Somolu and Mushin.

An executive of YOVIFPMAN, Okanlawon Tunji Oluwole of Vision Productions, who confirmed the development to NollywoodReel, added that the association will not rest on its oars in bringing the pirates, who had been feasting on the intellectual property of artistes to book.

“It will be a continuous effort and we are not going to give up until these people (pirates) stop feasting on our works,” he promised.