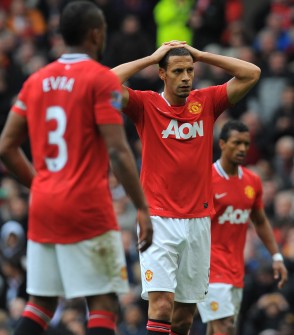 Everton twice came from two goals behind to share the points in an extraordinary 4-4 draw away to leaders Manchester United that reignited the English Premier League title race on Sunday at Old Trafford.

The result left United three points in front of second-placed local rivals Manchester City, who beat Wolves, bottom of the table 2-0 in a later league match.

City now have the chance to go top of the table on goal difference if they beat United in a Manchester derby at Eastlands next week Monday.

Everton, who last won at Old Trafford 20 years ago, took a 33rd minute lead when Nikica Jelavic headed in Tony Hibbert’s cross as the visitors looked to bounce back from their FA Cup semi-final defeat by cross-town rivals Liverpool.

But United were level before the break when Wayne Rooney, against his former club, powered in a header from Nani’s cross.

Everton, however, would not lie down and Marouane Fellaini’s first time shot from Tony Hibbert’s cross cut United’s lead to 3-2.

But when Welbeck teed up Rooney for the England striker’s second goal in the 69th minute, it appeared United had wrapped up all three points.

Everton though had other ideas with Jelavic scoring his second seven minutes from time and, two minutes later, South Africa’s Steven Pienaar swept in Fellani’s cross.

United almost won the match in the fifth and final minute of stoppage time but Howard saved from Rio Ferdinand.