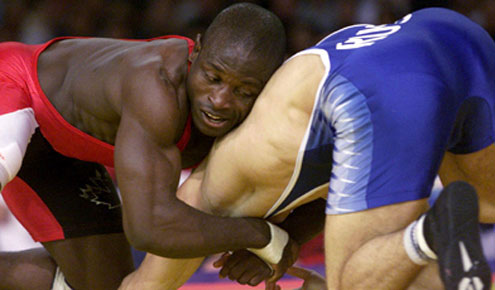 •Igali (right) in action for Canada.

Technical Director of the Nigeria Wrestling Federation, NWF, Daniel Igali, has warned Nigerians not to expect too much from the wrestlers who will fly the country’s flag at the London 2012 Olympic Games billed to hold later this year.

The former Olympic gold medalist said that lack of proper exposure of the wrestlers to international competitions will hinder them from winning medals at the games.

“The problem with our wrestlers is that they don’t have proper exposure in the sport. They have not been competing at international competitions which could have helped them in a big competition like the Olympics,” said Igali.

However, on a different note, NWF president, Austin Edeze, has revealed that Nigerian wrestlers will compete at the coming Indian Wrestling Championship billed to hold later this month.

The NWF boss said that it is the decision of the federation to expose the wrestlers to international competitions in a bid to expose them to tougher challenges.

“Nigerian wrestlers will compete at the Indian Wrestling Championship which will hold in this month of May. Our wrestlers will leave the shores of this country for India on the 23rd and return to the country on the 28th after the tourney,” hinted Edeze.

He said: “It is very important for our wrestlers to compete at international competitions like the Indian Wrestling Championship. It will give them necessary exposure to the sport and also prepare them for tougher challenges in the future.”