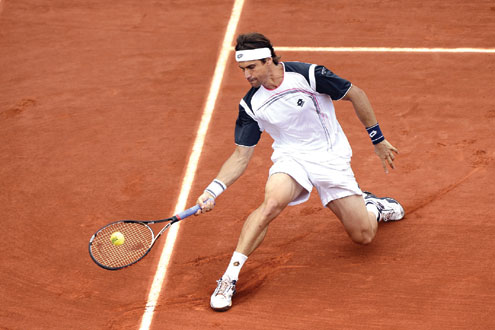 Rafael Nadal and David Ferrer will meet in an all-Spanish French Open semifinal after winning their way through from the last eight yesterday.
Defending champion and second seed Nadal ousted another Spaniard, Nicolas Almagro, 7-6 (4), 6-2, 6-3, while sixth seed Ferrer outgunned fourth seed Andy Murray of Britain 6-4, 6-7 (3), 6-3, 6-2.
Tomorrow’s other semifinal has already been set, with top seed Novak Djokovic of Serbia taking on third seed Roger Federer of Switzerland.
It was the 50th win for Nadal at the spiritual home of claycourt tennis since he first competed at Roland Garros as an 18-year-old in 2005.
His only defeat came in the fourth round in 2009 when he lost to Robin Soderling of Sweden in a fourth round match.
This year, Nadal is bidding to become the first player to win seven French Open titles, moving him out of a tie with Swedish legend Bjorn Borg. A win on Sunday would also be his 11th Grand Slam title, level with Borg and Rod Laver.
In the end Almagro went the way of so many others over the course of the last seven years, but he gave a solid account of himself especially in a hotly-disputed first set.
ìI was lucky in the last set. He had a few opportunities on my serve to have a break, then with my second or third chance I managed to close the match,î Nadal said.