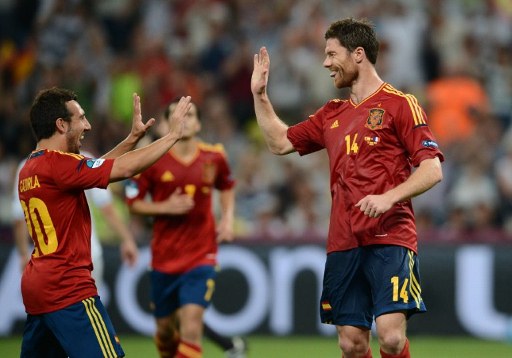 Real Madrid’s Xabi Alonso celebrated his 100th appearance for Spain with both goals in the defending champions’ 2-0 win over a tame French side in their Euro 2012 quarter-final with France in Donetsk, Ukraine on Saturday.

It is the first time that Spain have beaten France in a competitive match.

Alonso struck in the 19th minute after Jordi Alba had outstripped Anthony Reveillere down the left leaving the defender slumped on the ground and put in a perfect cross for the former Liverpool star to head past Hugo Lloris.

France pressed to get the equaliser and went closest through a freekick from Yohan Cabaye which Iker Casillas tipped over the bar for a corner.

The second-half saw few clearcut chances for either side though Mathieu Debuchy went close with a flashing header that just cleared the Spanish bar.

However, the fight had gone out of the French by the time Spain were awarded a penalty in the 90th minute and Alonso converted it to give the score a more realistic look based on the dominance of the Spanish.