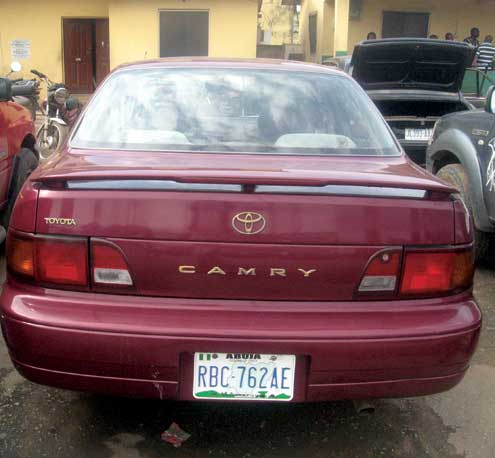 A car owner was stunned when he saw his Toyota Camry car which was snatched from him at gun point offered to him to buy near a bukateria he had gone to eat at Agidingbi, Ikeja, Lagos, southwest Nigeria. He quickly jumped at the ‘offer’.

P.M.NEWS investigation revealed that the owner of Toyota Camry marked LAGOS KTU 377 AH was robbed of the car on 10 June, 2012 at gun point, at Abesan Housing Estate, Ipaja, Lagos, after he was thoroughly beaten and pushed out of the car.

Luck, however, ran out on the robbers when the owner of the car was going to eat at a mechanic village, Agidingbi, Ikeja, Lagos on 27 June and sighted a car which resembled the stolen one and decided to check it.

On getting close to the car, he discovered that the car was his though the registration number was changed from that of Lagos to Abuja. Spare parts dealer told him that the car was for sale and that it belongs to him.

According to the complainant, the car dealer identified himself as Ignatius Okonkwo. The real car owner played along and negotiated the amount with Okonkwo. The car owner, who works with an Insurance company in Lagos, told Okonkwo that he was going to cash the money .

He immediately contacted the Area ‘G’ Commander, Mr. Ishola Abdulahi, an Assistant Commissioner of Police, ACP, who immediately sent an anti-robbery squad led by Supol. Dosumu Sunday to the scene.

The policemen,  Ignitus Okonkwo and Kolone John, the painter, recovered the car.

During interrogation, Okonkwo told the police that he bought the car from Oti Olusekola John and that before he bought the car, he made sure that he knew the house of John at Ibafo where he is building a house.

Okonkwo also told the police that the day he followed John to Ibafo to know where he lives, he saw two other cars at the site where he is building his house and the construction workers confirmed to him that John owns the cars.

The police at Area ‘G’ took Okonkwo to Ibafo to arrest John and when they arrived at Ibafo Police Station, the Divisional Police Officer told them that his men had already arrested  John and some of his gang in another operation.

Okonkwo told the police that he bought the Toyota Camry from John at N500,000.

When P.M.NEWS visited Area ‘G’ Police Command, the two cars were seen parked in the premises and there was blood stain inside the one marked ABUJA RSH 358 AC, suggesting that the owner might have been killed or seriously injured by the robbers.